Today, as I do every Tuesday, I was sitting with a man who is dying.

Each week I volunteer at Hospice House, and I have had the honor (and it is truly, the greatest honor) of sitting with several people just before they die… a few, on their last day of life. Today I was sitting with a wonderful gentleman who accepts that his cancer is “everywhere,” and he doesn’t want to go through any more treatment. He’s an incredible man: wise, charming, funny and sharp. He likes me, and I like him, so I make extra time for him each time I’m there. I’m not sure which one of us gets more out of this arrangement; I know it means the world to me… this sacred time we share.

Today, however, was different. As I was standing there talking to him, the news was on in the background, muted, so that we could talk. Slowly I realized that the words “Breaking News” kept flashing across the screen, along with images of ambulances and people running around. I was engaged, tuned out of the news and these things… but then, an image seemed familiar. The street on the TV looked like one I’ve seen… and then I saw the words, “Terrorist attack on synagogue in Jerusalem!” My twenty-four year old daughter lives in Jerusalem. It is not a large city, so anything that happens in Jerusalem, is too close for comfort in this mother’s eyes.

I couldn’t help it; terror grabbed me and I excused myself abruptly. “George (not his name), I’ll be right back!” I rushed to my purse, stored in the front cabinet, tears rising and struggling to breathe easily– hoping to find a text message from my daughter.  I felt an old, familiar panic rising in my chest. This is not the first time I’ve feared for my oldest child’s safety, in a city so far from me. There was no message, and my heart raced faster.

Admittedly, I also felt a moment of self-recrimination. This should be easier at this point. My girl has lived in Israel, off and mostly on for nearly three years now. She has told me dozens of times that the media exaggerates things. “I’m fine, Mom;” I could almost hear her saying. I was at work, in a place where others rely on me to bring comfort. I had to pull it together. George smiled when I returned and asked if my girl was ok. I shrugged, and told him that I wasn’t sure, but guessed that she was. We talked about the Middle East, and his views on Netanyahu. We pretended everything was ok, even though he is dying and I was worried about my daughter’s safety.

Sometimes, perspective is everything.

It should be easier… But my mother’s heart was racing. Scary thoughts swirled in my head. She became an Israeli citizen this past September. All but one of those murdered today had dual Israeli- U.S. citizenship. She is not a militant or politically motivated. Those murdered today were in a synagogue, bowed in prayer; they were not in a settlement or at a demonstration. My daughter is Jewish. Each of the men brutally murdered today were Jews.

It never gets easier; I’m a mother first.

There are times when I settle into a quiet acceptance of my daughter’s choice to live in a foreign country, far from her family and place of birth. I am proud that she has such strong convictions and passions that she would live so far away, in order to live a life that fills her– spiritually, aesthetically, ideologically. She has marched to her own drummer from the day she was born; as hard as it is, I respect and admire her for that. She is a Jew and Israel is the homeland of all Jews; she feels at home there.

Here in the U.S. my daughter has to search for kosher food and places to eat. She feels out of place; she stands out in her faith. She grew up in a town that consistently, EVERY year, schedules major sporting events and school tests on the Jewish High Holy Days, Rosh Hashanah and Yom Kippur. Ok, yes, I can hear you already: But there are so few Jews here! Should we observe every important holiday, in every faith? Point taken. But, should we observe EVERY important Christian holiday, just because that is the majority? I’ve heard people go on and on because a soccer game was scheduled on Mother’s Day! Hello? Really? As a mom, I hate having soccer games on my one officially sanctioned holiday too, but it’s not exactly sacrosanct.

My husband grew up in a community on the east coast, where there were enough Jews and Christians that everyone had the High Holy Days off from school. Christians were the majority there too, but it was just done that way out of respect. Here, each year our family has had to explain why our children will miss school or sporting events (which, again, are ALWAYS scheduled then) because it is the holiest day of the Jewish calendar. I am certain I’ve never had to ask for Christmas, Easter, or Thanksgiving off.

So, my girl found a place that respects her faith, her principles, her beliefs, and she moved there. Add to that, she finds it a beautiful country, filled with beautiful people and rich culture– and that is both Jewish and Arab people and culture. My girl has always been a person who embraces people from many walks of life. She does not discriminate, though she has faced discrimination, herself. She works helping African refugees in Israel. She has worked tutoring Arabs and Jews.

My girl has a big, wide heart… that was broken today.

At the same time that mine stopped … filled with anxiety and worry, hers was filled with grief and sadness; hers was filled with righteous indignation. She is justified in her emotions. There is nothing about the horror that happened in that Israeli synagogue that is explainable or justifiable. I’ve heard it all. I am not a staunch pro-Israel supporter, as many expect I might be. However, this was wrong on all levels. This is black and white for me: this was terrorism.

And still numerous media sites used what (even) I see as anti-Semitic, highly slanted headlines to report the incident.  The CBC stated: “Jerusalem police fatally shoot 2 after apparent synagogue attack.” Jerusalem police shoot 2? Hello? Those two shooting victims had just used meat cleavers to savagely murder four Rabbis, who were praying! Those two had just shot a police officer who was pulling another female victim to safety. The police officer later died. Those two shooting victims were cowardly murderers, attacking worshippers as they prayed. Numerous other news agencies removed the word “Palestinian” when referring tot he killers. Barely 24 hours later, many news sites did not even have this event on their current news, but many were reporting Israel’s response: demolishing the homes of the killers. There is no nuancing this to fit a political agenda or belief. They used meat cleavers. Guns… In a house of worship. No finessing can clean this up; this is what it looks like: 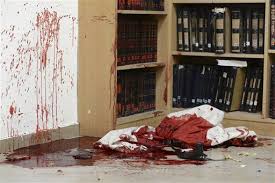 This is barbarism, nothing less.
themonitor.com

Let me say this clearly, because I believe it with every fiber of my being: If two terrorists walked into a church in any city in America and butchered 4 priests, with meat cleavers (!!), and shot several others… leaving that church awash in blood, there would be no gray area! There would be no words of explanation; no political rhetoric or nuance– no excuses. In fact, if those two men were black, or brown, or Muslim, I am ashamed to know that this country would rise up in abject rage. Let’s talk truth:

This was an act of outright terrorism and barbarity.

Because it happened to Jews, in Jerusalem, does not make it     any less so.

While I do not use filters very often, and I generally avoid politics on this blog and in most conversations, there is no other way for me to look at this event. As a U.S. citizen I have, sadly, become accustomed to mass shootings. I have become numbed down by the barrage of ISIS stories, and horrors, inflicted on people all over the world. Yet, I am always particularly impacted by attacks on schools and places of worship. Let me be clear; there is no place where this kind of attack would be ok, but the idea that these were men of great faith–men who studied long and hard to be closer to their God and bring it to their followers– these were men talking to God, when they were attacked and slaughtered. Prayer books and prayer shawls soaked in blood– and still, there were news agencies who rushed to place blame on Israel and the Jews.

I am a mother first… I am afraid too.

♥ Thank you to all of you who have sent emails, Facebook messages, or called our home to share your concerns and prayers. There can never be enough prayers, when it comes to peace, and the safety of our children. I am praying for all of the mothers, and all of the children who are facing these challenging times. ♥

Make me smile; and HELP ME REACH MY GOAL:  I’d love to see the Tales From the Motherland Facebook page reach 500 likes in 2014. Have you stopped by to spread some fairy dust? Follow me on Twitter, it’s where I’m forced to be brief.  Most importantly, if you like a post I’ve written, hit Like and leave a comment. I love to hear what readers think. Honest, positive or constructive feedback is always welcome. Click Follow; you’ll get each new post delivered by email, with no spam.  If you see ads on this page, please let me know. They shouldn’t be there.  ©2014  Please note, that all content and images on this site are copyrighted to Dawn Quyle Landau and Tales From the Motherland, unless specifically noted otherwise. If you want to share my work, please give proper credit. Plagiarism sucks.

Mother, Writer, treasure hunter, aging red head, and sushi lover. This is my view on life, "Straight up, with a twist––" because life is too short to be subtle! Featured blogger for Huffington Post, and followed on Twitter by LeBron James– for reasons beyond my comprehension.
View all posts by Dawn Quyle Landau →
Aside | This entry was posted in Awareness, Blog, Blogging, Courage, Daily Observations, Death, Dying, Honest observations on many things, Israel, Jewish, Judaism, Life, Love, Motherhood, My world, News, Parenting, Tales From the Motherland, Writing and tagged Anti-semitism, Dawn Quyle Landau, Israel, Israel Synagongue attack, longreads, parenting, Tales from the Motherland. Bookmark the permalink.