The Middle: If You’re Fu@#ing All The Time, You Must Be A…

Note:  It’s the perfect time to bring this one back. I’ve updated some things; so be sure to watch the hilarious fruit fly sex tape! These little guys are driving me nuts right now, as they always do from August through fall. I am setting wine glass traps, and smacking them all over my kitchen! But a little humor helps anything. Even fruit flies.

Warning:  This may gross you out. It may make your skin crawl. So many insects, so much sex.

I am losing my mind. Before you assume I’m talking about my dining room table still, I’m not. It’s fruit flies that are driving me mad this week, not the mess on my table. Those tiny little insects that appear every year around the end of summer, and then procreate like crazy all over my beautiful, fresh produce. Those infuriating dots that fly up in little clouds when I come into my kitchen, from about late August to mid-September, when the cold finally puts an end to their siege. Northern varieties actually hibernate, which seems cute in bears, but disgusting in fruit flies. However, while they’re around, they seem to multiply by the hour!  At my writing group last night, they began to congregate around the wine glasses and before the meeting was through, we all swore they had doubled in numbers! The little guys are fu@#ing all the time!

Surprisingly, there’s a lot to learn about about these insidious little flies:

The fruit fly, of the species Drosophila: which includes D. Melanogaster, D. Immigrans, and D. Simmulans… includes approximately 1,500 verities in total. The melanogaster is widely used in scientific studies, especially genetic studies. In fact, this little household nuisance is a labratory super star! Because they actually replicate many of the same genetic make-ups found in humans, they can be used for studies in all kinds of areas, inexpensively and without harm to humans or other animals. They’re especially popular because their chromosomes are quite large and thus easy to see under a microscope. Thomas Hunt Morgan studied fruit flies, and won the Nobel Prize in 1933 for identifying chromosomes as the “vector for the inheritance of genes.”  Fruit flies are not just studied in genetics, but are in fact, the most studied and researched bug in the world!  They have a short life cycle (1-6 wks, depending on the variety. The local/Pacific NW variety live about 8-10 days), interesting genetics,  they’re easy to breed, and let’s face it, I’d rather see them do scientific testing on fruit flies than other animals. Gives you a slightly different perspective when you find them swarming around your juice, eh?

Sex and fruit flies? Seriously, these guys are putting humans to shame. Males in the drosophila group are known to have the longest sperm cells of any organism on earth (300x longer than human sperms), and they are wired to use those sperm. These guys go on, and on… When you see them congregating around your bananas, your ripe peaches, anything in your kitchen, they are there for a quick bite, and to score with female fruit flies and create little baby fruit flies.  They are not there to drink your wine. They are doing the big nasty all over your kitchen people! Seriously.      Rated R: Mature audiences only for this video: 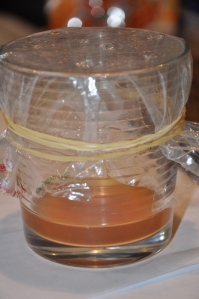 Fruit flies are not that smart. Ok, this one surprised me frankly. I’d always heard that they were, but apparently not. Fruit flies are focused on eating and reproducing, and can be trapped fairly easily. Wine, overripe fruit or cider vinegar make for best baits, and any container with a small funnel-shaped opening in its top works. The little guys follow the scent and once inside, generally can’t figure out how to get back out. Duh. I set up a cider vinegar trap today, and it seems to really works. I did write: “For a good time–>” on the glass, in tiny fruit fly print. I am currently also on a stealth mission, when I’m home:  I sneak into my kitchen at irregular intervals,  and hitt them with a sharp snap of a dish towel. My aim is good, the flies are stupid.

Did you know that fruit flies sleep. For real. They stop what they’re doing, close their little eyes and rest for a while. They’ve been used in numerous sleep studies, with applications for humans. 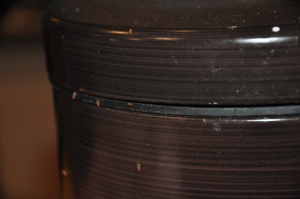 These guys are drawn to any fruit that is edging toward the overripe stage. If it’s brown, bruised, oozing, soft- use it or get rid of it. Females like to lay their eggs (up to 500) in rotting fruit. So,when it’s fruit fly season… saving those bananas for baking may also mean fruit fly eggs/maggots/babies in your banana bread. Gross, but true. If you have a compost bin (bravo for you, but), keep it emptied and keep it spotlessly clean. Ours sits on the kitchen counter and has become the main  hang out for the flies that taunt me. When I walk into my kitchen, I can practically hear them calling to each other: “Hey baby!” “Looking for a good time?” It’s almost enough to force my hand on the compost issue altogether. Almost. I will not be brought down by tiny fornicators. For now I’ll just plan to leave the windows open from time to time, let the kitchen cool way down and hope they freeze their libidos off.

Mother, Writer, treasure hunter, aging red head, and sushi lover. This is my view on life, "Straight up, with a twist––" because life is too short to be subtle! Featured blogger for Huffington Post, and followed on Twitter by LeBron James– for reasons beyond my comprehension.
View all posts by Dawn Quyle Landau →
This entry was posted in Blog, Humor, Life, Musings, My world, Nature, Summer and tagged Compost, Drosophilia melanogaster, Fruit flies, Fruit Fly, Fruit fly traps, Genetics, Humor, Insects and sex, Musings, Science and fruit flies, Tales from the Motherland. Bookmark the permalink.

21 Responses to The Middle: If You’re Fu@#ing All The Time, You Must Be A…