I went to see Madonna in Seattle on Tuesday night and I’m still recovering. Recovering from the late hour that attending involved, the night before flying out to see Middle Man at college. Recovering from sensory stimulation and overdose that I had no idea was possible outside of say, India. And as I keep assessing my recovery, I realized that attending concerts has become an examination of the aging process. I refuse to tell you my score; don’t ask. But there is no doubt… I’m getting old. (Here are some pre-show Madonna fans. My camera’s broken, so thanks EF for these) 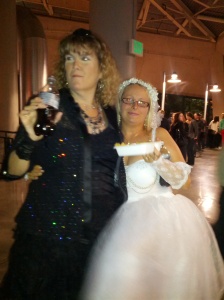 The Madonna MDNA Concert, Aging Quiz (choose one answer only)

1)   You attend the Madonna Concert and all day before the concert you have the following song in your head:

b)   Like a Prayer (Like a Prayer)- That Madonna really understands my need for independence, and she makes Jesus look so sexy!

c)    Live to Tell (- Wow! That chick can actually sing, and sing beautifully. (And I’ll say it here:  the lyrics “If I ran away, I’d never have the strength to go very far, how would they hear the beating of my heart,” are words that hit right to the core. Truly gorgeous lines.)

d)   Ray of Light (Ray of Light)- Love the way I just want to zip around when I hear it, and I get the whole life angle she’s singing about… not to mention that performance at the MTV music awards when it came out!

e)    Music (Confessions From The Dance Floor)- I totally love the grooves and it makes me want to go clubbing right now!

f)     Gang Bang (MDNA)- What the hell is that? Killing people because they piss you off? Isn’t there enough violence in this society?

2)   You attend the Madonna concert and as you walk around the arena pre-concert, you think:

a)    Wow! Everyone looks so cool! I’m so glad my lace gloves and cone tits fit in. I hope they stay on while I dance, dance, dance!

b)   Glad I wore a little glitter, and this tight dress.

e)    I’m so glad I have these Easy Spirits on.  I wonder if I can get a coffee for the drive home, but let’s leave before the last song, and beat the rush.

3)   While waiting for the concert, you think or say the following:

e)    This is ridiculous! I’m not staying any longer. Let’s go home.

4)   Listening to the warm-up for MDNA concert, DJ Daniel Solveig, you say or think:

a)    This guy is amazing! The beat is sooo cool!  Hey, sorry my cones/veil/big hair bow, giant cross hit you, while I dance, dance, dance!

b)   This is pretty good, I think I’ll stand up and move around a little.

c)    I hope this isn’t going to go on much longer and I wish Dawn would stop dancing in front of us.

d)   Geez! Is the DJ going to play all of Madonna’s old stuff, and that’s it?

5)   While Madonna performs Gang Bang, you think or say:

b)   This is really artistic and the music is great too!

c)    Uh, I think she’s trying to make a commentary on women not taking sh^t from cheating men anymore, but I’m not sure I like it.

d)    Holy cow! This is so violent! I just don’t see why Madonna needs to add to the violence in our society. Isn’t it bad enough that people are afraid of being shot in a movie theater, without worrying about the person they see in concert spraying blood all over a stage screen? I don’t like this.

6)   Throughout the concert you:

a)    Dance, dance, dance and scream Madonna I Loooove you!

b)   Stand up and dance for a good part of the show, yell when she sings your favorite songs, but sit when things get a little artsier.

c)    Stand up occasionally and move from side to side, but prefer your seat. You throw in an occasional fist bump to show you’re into Madonna.

d)   Think it’s getting really late. How late will this go? I wish Dawn would sit down.

e)    Dance? I’ve already passed out from too many beers or exhaustion.

b)   Wow! She blew me away! I want to go buy more of her albums and listen to them all over again.

c)    Walk with your friends to exits and excitedly discuss all the things you liked and didn’t like, while singing Madonna songs in your head. Those Drummers were amazing!

d)   That was pretty great, but I’m tired now and we’d better try and beat some of this traffic.

b)   Listen to several Madonna songs; and wish you could be seduced by the guy that tightened her corset during the concert. Man, he was hot!

c)    Listen to several Madonna songs and remember how incredibly cool those suspended drummers were.

d)   Finding yourself humming some Madonna songs, check Madonna off your concert bucket list, but get back to business.

e)    Take any medication that will help your headache. Tell anyone who will listen: I went to Madonna last night, but she didn’t even start until 10:30 and I’m a mess today! Feel really bitchy when you have to make dinner, because you’re exhausted from the Madonna concert.

b)   Wake up and feel really excited about the concert last night. Sing “Bang bang shot you dead, shot my lover in the head,” while you do all the things that you have to do anyway.

c)    Wake up and read all the reviews of the concert, while listening to a few tracks from MDNA

d)   Get up while it’s dark (three hours after you went to bed), humming Madonna songs in your head. Get your suitcase closed and upstairs. Get your Little Man son up and make sure his school stuff is all ready. Race to the airport and fly to California to visit Middle Man your other son. It’s 52 degrees when you take off, and 103 when you land. You drive from Palm Springs to Claremont, with Madonna songs in your head. Eat at In and Out Burgers. Go back to your hotel to clean up and write a blog post, that’s “due.” Listen to some of the Presidential debate, while you get ready for dinner. Hum a  little more Madonna. Put on a little cover up to cover the very dark circles under your eyes (as if your son will notice either way). Have amazing sushi with your son, for dinner. Go shopping for a pet carrier after dinner, to transport your son’s dog home with you. Get back to your hotel and read your book, to try and get rid of the Madonna songs in your head. Get to sleep at midnight, even though you were going to go to bed early. Drift off to sleep… No Madonna playing.

e)    Wake up and swear you will NEVER do that again! Drink very strong coffee to get you going. Rehash all the reasons that Madonna just wasn’t worth how crappy you feel today. Wish you hadn’t gone, but tell your friends it was a pretty amazing concert.

Results:  42-45 pts:  You are a young thang no doubt! A hip, Madonna loving baby (be you man or woman) who has way more energy than most of us. You spent some money on your outfit for the concert and you know Madonna is gonna see you in the audience and really love you. You are her biggest fan.  So what if I had to sleep with a few people to get into the dance pit. Woot, woot! I love Madonna!       30-36 pts: You are still young and hip. You really like Madonna because you remember her early stuff, Confessions from the Dance Floor (2005); and you like her new music too. You don’t wear panties because they leave a line under your tasteful, but very tight dress. (If you’re a guy, you wore the Hipster equivalent). You drink and have fun, but don’t really make a fool of yourself.  The tickets were pricey, so you maybe had to go with someone you won’t be seeing much longer, or you passed on the new Jimmy Choos at Nordstrom’s Rack.   25-35 pts: You’re aging, but aging well. You know how to have fun, but you’re practical too. You had some drinks before dinner, because you’ll be driving later but appreciate the festive occasion. You remember Madonna back when Like A Virgin had everyone dancing (but you’re sick of it now), and appreciate her “older” music a bit more but can still dance to the new music. The tickets were expensive, but you’ve worked hard and it’s worth it, to see Madonna live.   19-24 pts: Let’s face it, you’re getting a little old for Madonna Concerts, and might do better at say, the Eagles or Reunion tours (everyone from the 70s and 80s who’s still alive is doing a reunion tour: Flock of Seagulls anyone?). You had a drink or two, but wish you hadn’t because the concert is loud and now your head hurts. You don’t like all the artsy stuff in Madonna’s show: “Just play my favorite songs” you quietly wish. You resent like crazy that she comes on so late (who the hell does Madonna think she is?), but you paid a fortune for these tickets and you’re staying until she plays Like a Prayer.       0-18 pts: Um, I don’t know how to break this to you, but there isn’t great walker access to Madonna concerts. You hate drunk people making fools of themselves. You thought cone bras were stupid when Madonna wore them in the 80s, but they look ridiculous now (and Is that a man!); and you believe a wedding gown should be reserved for the sanctity of that holiest of vows. And all these girls with no underwear? Nice now, but that won’t work when bladder control becomes an issue. The music is too loud; you abhor violence and will never support Madonna again for playing with guns on stage. You’re terrified that the suspended drummers will fall; someone could die doing that! You can’t believe you paid a fortune for this bullshit and you’re pissed!   Mostly stars: Well, this is tricky. You have some issues, putting it nicely. Multiple personality disorder? Old but trying to fit into lycra still? Or maybe you just wish you still felt like A, B, or C, but you mostly feel like D or E. Either way, you’re probably better off staying home and watching this stuff on TV. Definitely stay away from bridal gowns.

Are you a Madonna fan? What’s your favorite song or album? Have you seen her in concert? What did you think? What is your ultimate concert bucket list performance, that you’d still love to see? (Preferably alive an still performing). Share your thoughts!

For you Madonna fans, check out these links as well: The 100 Greatest Madonna Songs; Gang Bang video from current tour (YouTube); MDNA tour, Suspended Drummers (Amazing! Be patient with video. Our view was MUCH better of the drummers!)

This post just about did me in… or was it the concert? I’m terrible with numbers (you try and figure out the numbers on a quiz) and it took ages. If I were back in school, I’d expect a big, fat gold star for this.  So Please:  take a minute (cause this post took many, many minutes!) and Like, Share, Subscribe, and Comment!

Mother, Writer, treasure hunter, aging red head, and sushi lover. This is my view on life, "Straight up, with a twist––" because life is too short to be subtle! Featured blogger for Huffington Post, and followed on Twitter by LeBron James– for reasons beyond my comprehension.
View all posts by Dawn Quyle Landau →
This entry was posted in Aging, Awareness, Blog, Blogging, Daily Observations, Freshly Pressed, Humor, Life and tagged aging, Freshly Pressed, Like a Prayer, Madonna, Madonna in concert, Madonna's MDNA Tour, Ray of Light, Tales from the Motherland. Bookmark the permalink.