To my mother, with love.

For those of you who have been following my blog for a while, you know that New Year’s Eve is the anniversary of my mother’s death. For those of you who haven’t, it is one year today. In that year, I have moved through a broad range of thoughts and feelings and actions. Today, I want to reflect. I will not be letting go, but moving forward.

A year ago, there was so much going on in our home that I could barely catch my breath, let alone process the fact that my mother had just died. We had two exchange students living with us; my husband, Smart Guy, had to have emergency surgery the very same night my Mom actually was about to die (she died at 4:30am on New Year’s Eve day; he had surgery the evening of the 30th); I had two other people who are close to me, in crisis; and I hadn’t left her room, at Hospice, in nearly days.

They called me at 2am on the 27th, my brother’s birthday, to tell me that I’d better “come right away. We think this is it.” Funny how different those words sound in movies, than when are spoken to you, about someone you will lose.  I raced out of my house in the middle of the night, with nothing but my fear of facing her end and a coat.

Mom did not die that night. She held on for four more days, and I was completely unable to leave the building during that time. Plenty of people encouraged me to; many friends offered to come sit, or to help, but I could barely leave her room, let alone the building. My sister came up early on the 27th, and stayed for the four days too. It was four of the closest days we’ve ever spent together. During that time, her husband (Sweet Guy) came up and kept us company. He took my sister out to get some air and something to eat. He tried nudging me to come along. I couldn’t do it. I felt paralyzed by the fear that if I left, Mom would die without us, and so I stayed there. My daughter eventually brought me some clean clothes and my laptop.

At the time I was trying to finish the manuscript for my first novel, in time to submit it to a small publisher in Massachusetts, who was taking submissions from unknown female writer’s, for a two month window. The opportunity was set to end at midnight on the 31st, and I was determined to send mine in. I “finished” and sent my manuscript to the publisher at about 8pm on the 30th. My Mom, lying in the bed beside me, was the first person I told. She smiled, but her eyes were becoming glassy and I knew that she was leaving us. Leaving me. I told her about my book and held her hand. Her smile meant so much at that point. I felt that she’d heard something very important from me, and I needed to know she was still there.

I wrote a post that night (read here), before I realized how close the end really was. Not only hadn’t she died on the night they first called, but she seemed to be holding on for reasons that none us could fully understand. She didn’t want us to go, but she lingered and lingered and my head began to swim within the closed world of the Hospice House. It is a calm, peaceful place, but not somewhere you really want to sit for days on end, waiting for something you can’t bear to face. I could not move beyond the doors of the building, but I was feeling so closed in and scared… waiting. Wishing for peace, and end to her suffering, and dreading the moment when she would actually stop breathing. My body hurt from sitting and sleeping on a hard bench beside her bed. It hurt from lack of exercise and poor diet. By the 30th, I hadn’t slept in more than 24 hours. Nothing felt normal or right.

Mom died at 4:25. In her final hour, she was terrified, and then she found calm. I played music she loves. I held a picture of my sister’s dog, who she adored. I told her that we were all there (I knew we were, in spirit), I told her that I loved her, that we all loved her. I told her that her beloved pugs were waiting for her; that her mother and father were there too.  I said “I know that you love us… I know that you love me, and I’m so grateful for that.” That, that very moment, she smiled faintly, but it was a smile— and then she exhaled her last breath. The room became utterly silent and I knew she was gone.

What I’ve really come to see, in the year since, is that her physical presence was gone. Only that.

After I left Hospice that morning, exiting the building and driving back to my home for the first time in three full days, I wrote a post in my car. I had to. I needed to say something, to absorb the finality of it, in just a little way (read here). The processing, I knew would take much longer, and it has.  There are several posts from November-December 2011 about Mom’s final days.

It has been a full year, 365 days. I have not thought of it every day; I have not grieved every day either—consciously. But I have felt the left over feelings, every day. I have felt her presence in ways I didn’t expect. I have felt her love and acceptance. I have felt her missed opportunities. I have reflected on her sadness and losses as well as the playful, witty, warm relationships that defined her just as much as the strained ones. I have sat in her seat, before my Christmas tree, and felt her thoughts… as my own. I have missed her.

Mother, may I continue to remember who you were: the bold and bright colors and the muted and dark ones as well. May I continue to work on myself, and understand that I can be like you, in ways that shine, but not be you. May I continue to help your grandchildren know that you were not the symptoms and horrors that Huntington’s Disease painted across you. May I remember as many good days as bad. You danced, you joked, you laughed, you argued, fought, you lived. In the end, you kissed and hugged us more than anything else; may I remember that. Mother, may I move forward free and peacefully, knowing that you loved me the best way you could, just as I loved you equally well.

May we all find the peace, the sparkle, the playful joy, the grace, the strength, the wit and the wonder, to face whatever is there in 2013. A very happy New Year to us all!

Images of my Mom, through the years:  My wedding, with my sister and I, at Principessa’s high school graduations, dancing at Little Man’s Bar Mitzvah, loving my sister’s pug Lottie. 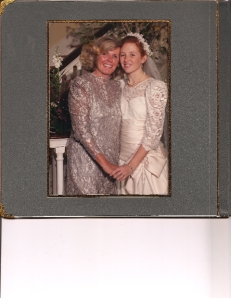 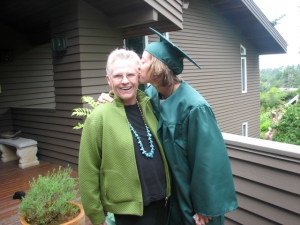 Mother, Writer, treasure hunter, aging red head, and sushi lover. This is my view on life, "Straight up, with a twist––" because life is too short to be subtle! Featured blogger for Huffington Post, and followed on Twitter by LeBron James– for reasons beyond my comprehension.
View all posts by Dawn Quyle Landau →
This entry was posted in Awareness, Courage, Daily Observations, Death, Death of parent, Dying, Honest observations on many things, Huntington's Disease, Mothers, Musings, Parenting, Personal change, Tales From the Motherland, Writing and tagged 2012, 2013, Anniversary of a death, death of a parent, grief, Huntington's Disease, loss, mothers, New Year's Eve, parents, Tales from the Motherland. Bookmark the permalink.

19 Responses to Mother, May I…