And The Award Goes To… 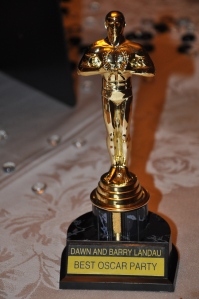 “For most tired and Oscar’ed out, Dawn at Tales From the Motherland!” Roaring applause please, and hopefully I don’t stumble on my way up to accept my statue, as Jennifer Lawrence (in Silver Linings Play Book) did, when she went to accept her Best Actress Award. Watch this hilarious interview, where she explains why she fell. I would stumble up there, and no doubt make an utter fool of myself— still hung over two days later. Let me be clear, not from the wonderful Champagne Kir Royales I drank all night, but from activity overload—brought on by three and a half full days of prep, and then full on hostessing for the big night! On Monday morning when I got out of bed, my feet actually screamed and the rest of me groaned in agreement. Man, I love Oscar, but I am getting too old to keep up!  I’m thinking I may need to do something different… who am I kidding? I love this stuff!                                                          (The food, oh the food!)

Last year I wrote a detailed explanation of the history of my Oscar obsession (here) and my movie fixations, complete with photos of past costumes. None of that has changed: I love the night; I love almost every thing about it.  As I said in that post, I’ve been watching movies since I was a very little girl. Movies, the big Hollywood productions of my childhood: Wizard of Oz, Singing in the Rain, anything with Fred Astaire, Gone With the Wind, Butch Cassidy and the Sundance Kid—oh, this list goes on and on— have always been a part of my life! There are plenty of ties to my childhood in my 100 Best Movies post. The movies were my way of running off on an adventure. They swept me up and spun me around; they put me to bed, and kept me believing in magic long past when other kids were savvy enough to know better.

The movie stars and all their glam are part and parcel to this grand adventure. I read about them; I watched them at the theater, and I believed I stood a chance of being a part of that big fantasy world one day. I grew up, of course. I stopped dreaming of running off to be in movies, but I’ve never grown tired of watching them. I see as many movies each year as I can—at the theater, or at home— and I still watch with the excitement of a kid. When Life of Pi came out this year, I could not wait to see it, having loved the book. The Hunger Games: read all the books and then raced to see it the first week. I knew when I walked out that I would be Effie Trinket at my Oscar Party this year, long before the movie was over! I couldn’t wait to see Lincoln, having heard that Daniel Day Lewis knocked it out of the park. He did. We saw Beasts of the Southern Wild at home, before I’d read much about it. When it was nominated for Best Film, we all agreed that the Academy got that one right. Argo: Loved it! Little Man insisted that it was the best in the bunch, and he was spot on—but this year, it was a hard call in our house. With the exception of Zero Dark Thirty (very good but not great), we felt any one of the nominated films was deserving.

For me, Oscar night has become all about the party I have. It’s what I plan for; it’s what I work on; it’s what I fixate on, for weeks before the big night. The show: I barely watch most years. This year, I watched more than usual, and paid for that the next day—in more clean up and debris. Generally my fabulous faerie helpers do almost all of it, but this year I got caught up in the broadcast and sent them home too soon, with the ridiculous words: “No, don’t worry; I’ll get the rest…” My bad; my price to pay. The girls were fantastic and did just what I asked. I just made a fatal mistake. Two days later, I’m still cleaning. But oh the fun of sitting with our friends and cheering on the stars and the event!                        (The beautiful people: Argo; Glam; Moonlight Kingdom; Lincoln; Stacy Jaxx/Rock of Ages and Katnis Everdeen/Hunger Games) 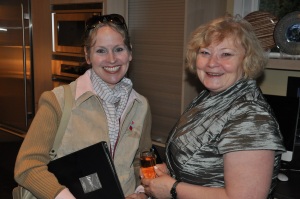 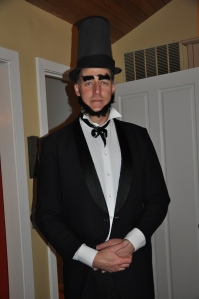 The show itself was a mixed bag for sure, as every entertainment site has reported. Depending on who you read, Seth McFarlane the 2013 Oscar’s host, and the writer and voice behind such culturally huge characters as Stewie Griffin, Peter Griffin, Brian the dog on Family Guy, TED (the obnoxious bear in the movie of the same name), etc., was witty and funny, or deeply offensive and one of the worst hosts ever. He certainly pushed the envelope and offended more than just Chris Brown and Rihanna.  In the song We Saw Your Boobs McFarlane put the spot light on every big (female) name in the first five rows who’s ever exposed their breasts on screen. Beyond the fact that it was cringe worthy right there, several of those “exposures” had come during rape scenes in their respective movies. Ouch. Needless to say, some did not find it funny and Tweets came flying in as fast as the ratings went up. The humor was predictably edgy, off color at times, and clever and quick other times.

Personally, under the haze of champagne and hostess buzz, the show is always a background part of the evening for me. I’m busy thinking about the food, the drinks, the flow of the event, entertaining the crowd… I’m on stage all night, and watching the show really comes the next day or two, when it’s quiet and I can really watch it all… as I recover. Despite the reviews, I found McFarlane charismatic (love that smile!), dynamic (he sings, he dances, he does voices!), and yes, offensive at times… several times, but pretty good.  That said, that’s part of what these event have become about: they seem to all be roasts, as much as award shows. Back when the big man, Bob Hope, was doing it, the jokes were kinder, gentler. Now they are cruel and hurtful. The audience laughs, then groans, unsure of what is right—surrounded by all that sparkle. It’s all too much, but in fairness, I’m not sure that should fall on Seth McFarlane. He did what he was hired to do. He brought the younger viewers, and he brought the very humor he is famous for. Had anyone from the Academy ever watched Family Guy, before hiring him? Really! If you hire Chris Rock or Seth McFarlane, you get Chris and Seth. If you hire Billy Crystal or Jon Stewart, you get Billy or Jon. Just sayin’.

The dresses were over the top; stars looked beautiful and glam. That’s what the Oscars is all about: the shine and sparkle of a year in movies. The faces seem to get tighter and less expressive every year, which stood out more this year for some reason. Plastic surgery, injections, alterations up the yin yang are nothing new, but as we all watched, it seemed the crowd at my house were constantly asking: How old is she/he? Or saying:  Oh my God, what happened to him/her! The stretched, pulled and lifted bodies and faces were just too much (Nicole, stop!). Even younger actresses are over the top now, and few of them look real.  If I’m errr, ummm, well, (just) (barely) (gulp) 50, how could that actor/actress that was a grown-up when I was a kid, be ten years younger than me now?  I kept thinking.  It was disorienting. It is really old, even if no one looks it… except perhaps Christopher Plummer, who looked just as he should for 83.

Life of Pi could hide from all that flesh

There was a ridiculous fixation on nipples and breasts (read: Nipped), as has become the trend in the past few years. Whether they were pasties or real nipples, that’s what people were talking about when it came to Ann Hathaway, instead of her lovely gown or her Academy Award for Best Supporting Actress. What’s up with that? And why do so many people hate her? While some of the breast stuff is in fact just crazy over the top, why is it such a big deal? Back in the day, women had nipples and people knew it; they didn’t go to endless lengths to pretend they aren’t there. Grow up and get over it people! Seth McFarlane, don’t sing silly songs that come right out of the mouths of 14 year old boys, alá Beavus and Butthead. I love that someone thought to turn it on its ear and sing “We Saw Your Junk.” Let’s at least level this stupid ass sex field. Nuff said.

I can’t help it; I get off on all this stuff. I love it. I watch the movie; I read about the stars and their lives; I have a party each year to celebrate all of this plastic, fantasy, sparkly, stirring-music and pomp. I get teary eyed each year when they show the stars that have died. I love seeing the speeches and the all the glitter that goes with this big movie night. It doesn’t really get old for me, even as I throw out snarky quips and assess each scene or skit. I’ll keep going to the movies (hell, for the popcorn as well!); I’ll keep rooting for my favorites, and I’ll be putting on an Oscar shindig each year, and watching the show with friends. It’s part of who I am; good or bad.

What was your favorite movie this year? Did the Oscars thrill or chill you this year? Do you watch the show; do you go to the movies, or is this all silly stuff for you? Tell me what you think, in the comments section.

Read more:  My post last year, had a little more background and some costume photos. Read: Golden. Call Me Oscar.  My buddy Rebecca wrote a much more intellectual and sharp assessment of the Oscars, check it out: Post-Oscar Malaise…

Show some love for an aging Hollywood junky. Hit the Like. Then head over to the Tales From the Motherland Facebook page and hit the Like button. We love our fans.

Mother, Writer, treasure hunter, aging red head, and sushi lover. This is my view on life, "Straight up, with a twist––" because life is too short to be subtle! Featured blogger for Huffington Post, and followed on Twitter by LeBron James– for reasons beyond my comprehension.
View all posts by Dawn Quyle Landau →
This entry was posted in Beauty, Blog, Blogging, blogs, Honest observations on many things, Humor, Musings, My world, News, Tales From the Motherland, Wonderful Things, Writing and tagged Academy Awards, Anne Hathaway, Argo, Beasts of the Southern Wild, Best Picture, Django Unchained, Effie Trinket, Life of Pi, Lincoln, nipples, Oscar party, Silver Linings Play book, Stacy Jaxx, Tales from the Motherland, The Oscars, Zero Dark Thirty. Bookmark the permalink.

21 Responses to And The Award Goes To…