The Highs and Lows of Legalized Marijuana

Recently, I had my attitude checked in a marijuana dispensary. You read that right: a weed shop. If you know me personally, and are judging me right now, save it ‘til the end; you may be checking your attitude too. If you don’t know me, then read on, but this may be checkmate.

Marijuana has been legal (in some form) in the state of Washington for almost three years now. It still feels new, and there is plenty of good humor about the availability of magic edibles and medical versus recreational use. I would be lying if I said that I never tried it before its legalization. I smoked it in college, on several occasions, but it made me sleepy and slow; it wasn’t my thing. But many of my friends smoked regularly, and while I knew it was illegal, I wasn’t that worried about the criminal element of using it.

Flash forward. I’m a fifty-two year old woman with three nearly adult kids; I’ve been married twenty-nine years, and I use marijuana for pain management. Mostly. I’ve had a very serious auto-immune disorder for may years, that’s lead to countless hospitalizations and surgeries and has left me allergic to all but two antibiotics, and nothing except Tylenol, for pain management. If hospitalized, there are a few pain meds I can take, along the lines of elephant tranquilizers, but if I have a sinus infection, a severe headache or several broken ribs and 2nd and 3rd degree burns… it’s an ice pack and the sofa. That’s what it was a year and a half ago, when I had an epically horrible year, and my doctor finally said to me: “have you considered medical marijuana?”

Admittedly, when my doctor, who is conservative and very thoughtful in his approach, first suggested that I consider using medical marijuana for pain management, I giggled like a girl… who was high. The idea of it was crazy to me. I said no. Then, in a freak boating accident I broke six ribs. Ten days later, I had a large pot of boiling soup spilled on me and sustained 2nd and 3rd degree burns on my chest and stomach. The ribs, which were unbearable, paled in comparison to the agony of burns… on broken ribs. I was given morphine for pain, and was immediately sick. Morphine was added to the list of pain options that I’m allergic too, and shortly thereafter I took the marijuana suggestion much more seriously and got my prescription.

Getting the prescription was the first hurdle; going to get it filled was harder! Having thought of this as illegal for so long, having told my teenage kids how bad it was to “do drugs,” I felt embarrassed going to the medical dispensary. I was afraid that someone I knew would see me and judge me. I was confused about what it would be like to use weed for pain–– Would I get high or just get relief from pain? Would it impair me in other ways? Was it addictive? All kinds of things went through my head, most of them based on old misinformation.

At the dispensary I faced the next hurdle: getting the prescription filled. You don’t just walk into these places and buy marijuana. You bring a prescription and they register you. It’s all done very clinically. I filled out pages of health forms, just like you do in doctor’s office. After that, the receptionist called my doctor’s office to confirm that I was a patient, and had I been given this prescription. When the receptionist at my doctor’s office asked to speak to me, to confirm that it was me filling this prescription, I was mortified! I imagined all of them having a good laugh over this, and cringed at the thought that this is the same office where I take my kids. You’d think I was buying marijuana or something! Exactly.

In the product room, the smell of fresh cut Hindu Kush was incredible. I can’t lie: I wanted to curl up in a field of that sweet, organic smell and nap. “Nick,” the “budtender” found this hilarious, and was happy to show me how the buds are cut, and used. It was fascinating, and surreal to look into a huge bin of what I’d spent my entire life thinking of as illegal. Nick then very clinically described all of the products available for pain, as well as for anxiety, sleep, depression, relaxation, etc. I felt so stupid, so old… like an old dork… as he explained how to use a “vape pen” (portable vaporizer), what “edibles” were, and all of the nuances of medical marijuana. I bought a tincture (placed under the tongue), and some Mango Haze to use with a vape. Nick assured me that the smoke would not irritate my lungs–– that it would be smooth, and that neither would make me high, only manage my pain.

Nick was a really nice guy, with a sweet face, but he was wrong on both counts. The first time I tried the vape, I coughed so hard I thought I’d burst veins, and within thirty minutes I was shoving tortilla chips in my mouth, like I was back in college. Apparently Nick and I have different thresholds. I frantically waved my hands in the air, trying to get rid of the evidence smoke, and tried not to giggle too much. There was nothing mature about my first foray into legalized marijuana.

All of this sneaking around is particularly interesting to me, in light of one very huge hypocrisy about all this: alcohol is not only widely used and abused, but seen as socially acceptable, to all but a few and people of certain religious faiths. Marijuana, despite its legalization, is not. We all know people who drink too much, too often, and it’s not unusual to see photos posted on social media of drinks raised. Many parents lecture their teens about drinking, but then go out for drink with friends… and drive home. Alcohol use and abuse takes an enormous toll on society. It is the number one cause of vehicular fatalities, and yet, it is widely accepted and tolerated, while marijuana use is still seen as criminal, or at the very least questionable.

A very important study released early this year by the National Highway and Traffic Safety Administration found that consuming marijuana does not increase the crash risk of the driver. Read that again. Gordon Trowbridge, the communications director of the NHTSA called this study the most closely controlled study of its kind that has ever been done. My guess is that most readers will find this shocking; I did. This does not mean that marijuana use and driving is safe, or that marijuana does not cause impairment. But alcohol, not marijuana, is the leading drug-related risk factor in vehicular fatalities.

And that brings me to my attitude… and having it checked. It’s legal; I’m an adult, and so I went to a recreational store recently, to see where my nephew works part time and to see what they sold. I was coming from a formal meeting and my friend and I were “dressed up.” While we were there, several other customers came in, and I found myself sizing them up. I didn’t realize just how much, until thirty minutes after I left and I couldn’t find my iPhone. I searched “everywhere,” and finally called the store; I knew I’d had it at the counter. The owner was kind and very concerned. “Oh man, I’d hate to think that any of my customers would steal your phone!” He was sincerely upset–– and said exactly what I was thinking. In fact, I was sure a particular lady had probably taken it.

It doesn’t take Sherlock to guess the punch line here. My phone had fallen in between the seats of my friend’s car, but not before I had judged every person I saw in that store. When I realized my mistake, I felt sick, actually sick. “You know, if that woman had lost her phone, she would never have accused us of taking it,” my friend commented. I knew she was right, and I just felt sicker. What made me judge these people–– the fact that they were buying weed? I was in the same store for the very same reason. I called the storeowner immediately and apologized for worrying him. He was so relieved, but I still felt horrible.

Twenty-three states and the District of Columbia have legalized marijuana in one form or another; four states and DC have legalized it for recreational purposes. It’s legal where I live; I’m over twenty-one years old, and still I have hang-ups about its use. I worry about what others will think, even as I write this. While visiting the state of Colorado this week, I heard about a local group of mothers who staked out a local dispensary and then started posting the names of parents who shopped there… to humiliate them. I don’t know if this story is true, but frankly, it wouldn’t surprise me. It’s appalling, and hypocritical on so many levels and I believe it leads to all kinds of mixed messages with our kids. Just like alcohol, this should be seen as a mood-altering drug that must be used responsibly and legally. I’m no fool; I’ve never assumed that my kids or the teens and college students I know care any more about the legality of it, than my peers and I did, when we were their age. Again, it wasn’t my thing, but I drank long before I was legally allowed to. What’s the difference? Oh right, one kills more people.

I have long believed that marijuana should be legalized for both medical and recreational use. I believed that on principle. Yet, I slinked into the medical dispensary like a criminal, and far worse: I assumed that folks who were in a recreational store, for the very same reasons as me, had stolen my phone, based solely on the idea that they were buying pot… so they must be untrustworthy? Well friends, watch your phones around me! It’s time we all put on our grown up pants and accept that when we pick our poison, one is no better than the other. One person buys a bottle of wine for dinner, another takes a few hits of weed. I came home from the dispensary recently, with my attitude in check… and some very fine chocolate. 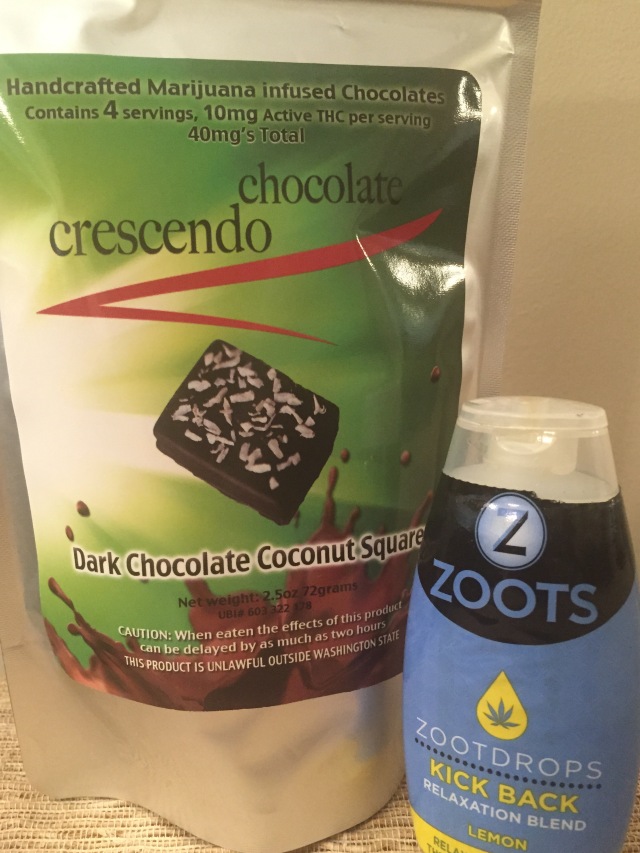 Help Me Reach My Goals!   KAPOW!  The Tales From the Motherland Facebook page recently hit the 2015 goal of 800 likes (which I set after hitting the 700 mark)! I’m going big for the next year and aiming for 1,000!! Have you stopped by to spread some fairy dust? Follow me on Twitter, LeBron James does (yes, for real)! Most importantly, if you like a post I’ve written, hit Like and leave a comment. Honest, constructive feedback is always appreciated. Click Follow; you’ll get each new post delivered by email,  no spam.  ©2015  Please note, that all content and images on this site are copyrighted to Dawn Quyle Landau and Tales From the Motherland, unless specifically noted otherwise. If you want to share my work, I’m grateful, but please give proper credit; plagiarism sucks!

Mother, Writer, treasure hunter, aging red head, and sushi lover. This is my view on life, "Straight up, with a twist––" because life is too short to be subtle! Featured blogger for Huffington Post, and followed on Twitter by LeBron James– for reasons beyond my comprehension.
View all posts by Dawn Quyle Landau →
This entry was posted in Honest observations on many things and tagged #WPLongform, Dawn Quyle Landau, Legalized Marijuana, Marijuana-Colorado, Marijuana-Washington, Medical marijuana, Tales from the Motherland. Bookmark the permalink.

37 Responses to The Highs and Lows of Legalized Marijuana