Ok, I admit it: I’m getting old. I find myself lost in the crazy world of progress. Some days lately, I sound like an old lady even to myself! Look at all those naked butts! These black leggings have got to go!  Or, take your hat off when you’re inside, or at the table. Or, What the hell is going on with Halloween costumes for girls? Seriously people, why are so many costumes variations of slutty, inaproppriate images for girls, while boys get to be action heroes, goblins, ghouls, knights, pirates, and the like. The girls can be these things too:  if they’re willing to saunter about in super short, breast push-up, pedophile attracting counterparts. So call me an old lady; go ahead and do it in the comments section; but I find it disgusting! 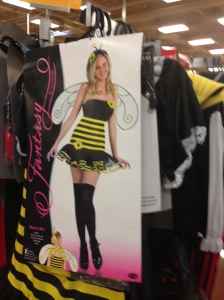 We wanted to be rolly polly bees; cute bees…

While my neighbors and I carve pumpkins and put up fake cobwebs, as we get our houses ready for a night of doorbell ringing and kids in costumes, asking for candy, there are girls out there trying to figure out how to dress for the night, or for a party, when their options have become so utterly limited. When I was in high school and college, we liked to figure out creative, clever costumes… and sure, we wanted to look good. But looking good didn’t really involve pure sexuality. I was a Q-tip my junior year of high school (somewhere, there’s a photo of this, but not in my possession)– took me forever to make my cottony cone tip head and fluffy leg warmer tips. Ok, so maybe a few people thought I was a tampon, but not a sexy one. My friends were cowgirls, fairies, scary kids (from the Children of the Corn); we were cute,  we were funny, we were clever or scary; we were not sluts. There was very little focus on sexy, in our minds.

So apparently I’m officially out of touch.  A week ago, I wandered into our annual Super Halloween store– you know, the ones that pop up in an empty space, each year and make Halloween their entire focus. Very quickly it was clear that unless I wanted to dress as a slutty variation of any of the usual suspects, I was shit out of luck, where costumes are concerned. However, it was when I wandered over to the kids only costume section that my old lady guts found themselves all bound up. When oh when did it become for ok for little girls, size 4-6 to dress as “Midnight Mischief?” Do these girls even know what kind of mischief there is at midnight? 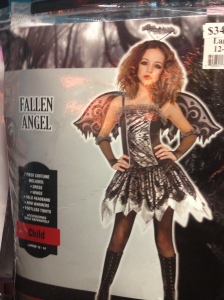 pushed and influenced to dress provocatively on virtually every level, without getting to dress up as “Fallen Angels,” at twelve? And what kind of parents allow their young daughters to model for these costumes? Yep, there I go again, being an old lady. ‘Cause in my day, we got to be ghosts (entirely non-clingy sheets in place), witches (the non-sexy ones, that were just scary and ugly), gypsies (with colorful, silky scarves). We were not sexy; our parents forbid it. There were boundaries that weren’t crossed, and we were young girls playing pretend. We did not pretend that our barely formed breasts were there to get better Treats.

In the most appalling, most disgusting example of a costume, a company actually thought this was somehow ok. Maybe they market inappropriate costumes, but someone out there came up with this costume and crossed a line, because on some disturbing level, they thought it was ok. Don’t bother writing in to tell me it’s a joke. It’s not. I have a dark sense of humor; I get that stupid and even dark can be funny. But, people this is not funny, it’s just plain wrong. Let me be clear: on every level. Having worked as a social worker on an Eating Disorders Unit for two years, trust me: there is nothing, nothing funny about young women starving themselves.

So, I’m out of touch; I’m clueless. In my mind, Halloween is a time for Tricks and Treats. My kids went as Mummies, Heroes and Heroines, Hippies and other age appropriate costumes. There was no sexy in those costumes, and I made sure my girl could be just as clever, strong, or epic as my boys (Here, she’s Queen Amidala, from Star Wars). Today, I look around and I’m shocked to the left, shocked to the right. I’m left scratching my head and asking when did little girls and women become the utterly inappropriate treats of the night, or the butt of sick jokes? Why on earth do boys still get to save the world while girls get to shock the world. Or, am I the only one shocked? Go ahead; call me old.

Pulled this together with things at home… Cleopatra, no skank.

It’s a boy and man’s world, even on Halloween: 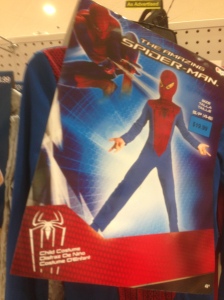 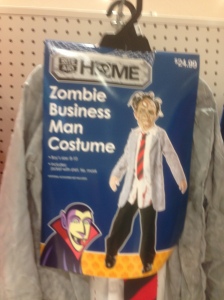 Is this a trick or am I missing the treat?

Help Me Reach My Goals!   KAPOW!  The Tales From the Motherland Facebook page recently hit the 2015 goal of 800 likes (which I set after hitting the 700 mark)! I’m going big for the next year and aiming for 1,000!! Have you stopped by to spread some fairy dust? Follow me on Twitter, LeBron James does (yes, for real)! Most importantly, if you like a post I’ve written, hit Like and leave a comment. Honest, constructive feedback is always appreciated. Click Follow;

Mother, Writer, treasure hunter, aging red head, and sushi lover. This is my view on life, "Straight up, with a twist––" because life is too short to be subtle! Featured blogger for Huffington Post, and followed on Twitter by LeBron James– for reasons beyond my comprehension.
View all posts by Dawn Quyle Landau →
Aside | This entry was posted in Honest observations on many things and tagged Dawn Quyle Landau, Halloween, Halloween costumes, Halloween for girls, Inappropriate Halloween costumes, parenting, Tales from the Motherland. Bookmark the permalink.