Three Pair of Pants, One Long Skirt (for Shabbat)… Israel, Here I Come!

Today I leave on a 10 day adventure to visit my girl, Principessa. She’s been in Israel since early September, but she’s spent nearly two years there in the past three years. It’s where she wants to live. Live. While I’ve hoped she would decide to come back, not settle in Israel, a foreign place half way around the world, I’ve finally agreed to go over and see the place she loves so much.

I made the decision two weeks ago. That may be considered last minute to some, but it took me a while to really opt in.  Then,  cautious person that I am , I just waited until I had to buy the tickets. I knew I’d go eventually, and she has an entire week off right now. I admit to a moment’s hesitation when the military situation became rather unstable in November. Principessa assured me that things were fine, but I didn’t really want to go to a place where missiles were being lobbed. I didn’t want my girl to stay in a place where missiles were being lobbed. But that wasn’t going to turn her thinking around. I wasn’t sure I wanted to travel 24 hours each way either. And an apartment with limited heating? Well, not really my 50 year old cup of tea. 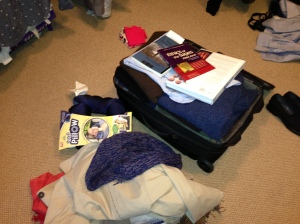 This bags too small…

However, I am inherently a free spirit and always have been. I love adventure and I love to travel. I love to be on a plane by myself, and I’ll have Seattle to Frankfurt and then Frankfurt to Tel Aviv to just read, listen to books on tape and work on my manuscript. I have writing I’m dying to do, and a book I’d like to finish. I love that no one will be asking me what they should eat for lunch; I’m thrilled that I won’t need to pick up Newman’s Limeade at the store, again, and no one will ask me “what’s for dinner,” for the next 10 days. Call me giddy, but yeehaw!

You can’t have too many shoes… unless they don’t fit in your bag.

When I arrive, after 24 hours of no sleep (I don’t sleep on planes, and I’ve been told to try not to) my daughter will be finishing Shabbat and will have dinner for me. And then, if I can stand, I’m invited to a 30 year old’s birthday party. That could be fun. I imagine I will be a party game: pin the yarmulke (Jewish beenie) on the passed out middle aged lady. I may be passed out, but I’ll be smiling.

I’m going on this trip with no expectations. That is a big thing for me. I big step forward. I am going to see my girl without any plans for how it will look or feel to be there. I am excited to see her world, the place she loves. I am open to whatever happens, excited to see what she shows me.

There was a time when going to Israel was something that I wanted very much. For four years of college, I was sure that one day (before I married) I would travel to Israel and live on a kibbutz. It’s something that lots of my peers did back then, and it sounded so exotic and exciting.

What I’ll carry in my back pack.. And Twizzlers. Lots of Twizzlers.

Then the Middle East shifted, Jewish tourists were being selected on planes and shot. Leon Klinghoffer, an elderly Jewish man in a wheelchair, was shoved off of cruise ship. Suddenly a kibbutz in Israel did not seem as appealing. Israel lost it’s appeal for me; lots of years went by, and ironically, my eldest child fell in love with the very place I had dismissed. Interestingly, on the itinerary she sent me, was one night at a kibbutz. Talk about crazy-ass circle of life.

And this bags just right! I’m ready to go…

So, I’ve been crossing T’s and dotting I’s; running on scavenger hunts to get things that Principessa needs (Hello, if they don’t have sewing kits in a country, don’t move there. Just sayin’), and trying to figure out exactly what clothes and shoes I’ll need to visit ancient lands, float in the Dead Sea, and see the Western Wall… not to mention experiencing the homeland— the epicenter, of so many world religions. I’ve packed and repacked, to make it all fit. I’ve downloaded music and an audio book on meditation. I am minutely nervous, a teeny, tiny bit—But mostly, I am very excited. And I am packed.

Do you like to travel? Are you ok traveling alone? What about long distances… do you do it? What’s the coolest place you’ve been and why? Share your thoughts in the comment section.

Mother, Writer, treasure hunter, aging red head, and sushi lover. This is my view on life, "Straight up, with a twist––" because life is too short to be subtle! Featured blogger for Huffington Post, and followed on Twitter by LeBron James– for reasons beyond my comprehension.
View all posts by Dawn Quyle Landau →
This entry was posted in Adventure, Aging, Blog, Blogging, Daily Observations, Honest observations on many things, Humor, Jewish, Judaism, Life, Mothers, Musings, My world, Personal change, Tales From the Motherland, travel, traveling alone, Women, Women's issues, Wonderful Things, Writing and tagged Adventure, blogs, Israel, Judaism, Kibbutz, Leon Klinghoffer, Packing, Tales from the Motherland, travel, Travel in Israel, Western Wall, writing. Bookmark the permalink.

29 Responses to Three Pair of Pants, One Long Skirt (for Shabbat)… Israel, Here I Come!