Would You Take a Bullet… For Peace. 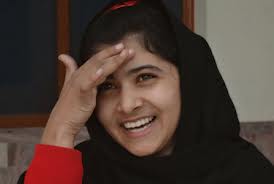 I’m talking about teen blogger and activist Malala Yousufzai, 14 who was gunned down this week for… going to school.  When I read the story, Wednesday, of the shooting that has left her in critical condition, from gunshot wounds to the head and neck, I was truly shaken. I remember reading about her a few years ago, when she first came into a small, but stunning spotlight. Malala is no stranger to the risks and threats of getting an education: she has been fighting the Taliban since she was 11 years old (probably before),  for the right to attend school in her small village of Mingora, in NW Pakistan.

In 2009, the Taliban had taken hold of the region, moving into the small school for girls that Malala’s father had built and run. He was determined to see young Pakistani girls get an education, his own included. In his own right, this made him a pioneer. His daughter embraced that idea early on, and was passionate about academics, saying that she wanted to be a doctor. She studied hard, and attended classes despite Taliban edicts that forbade girls to be educated. At the time, her father was threatened with beheading for sending her to school; she received death threats, and the entire family lived in fear of reprisals on a constant basis.

Later in 2009, the Pakistani military came into Swat District and pushed out the Taliban, in a battle for control of the area. After the school reopened, Yousafzai, not just content to get an education, took up the cause of Pakistani girls and their right to an education. She began blogging about the situation, an open challenge to the Taliban, despite threats to her safety.  In December 2011 she was awarded Pakistan’s first National Peace Prize, for person’s under 18. She has had schools named after her, and met with President Obama’s special representative to Pakistan, about the situation regarding girls and education in her country. This girl kicks serious butt, when it comes to courage and determination!  All in the name of something that so many kids here take for granted.

It takes true cowardice to shoot a child.
Image: Huffingtonpost.co.uk

In what I believe to be the ultimate in cowardice, Wednesday a small group of Taliban soldiers stopped the bus that Malala Yousafzai was traveling home from school on. They demanded that Malala be identified, or they promised to shoot all of the girls. When the other girls pointed her out (imagine the terror they felt), the cowards shot this 14 year old once in the head and once in the neck. Two other girls were injured as well, one critically. Thankfully the bus driver, sped away, perhaps preventing further terror.

Malala was rushed to the hospital and later air lifted to a larger military hospital in Rawalpindi. The Government is making sure that she receives intense security, as well as covering all medical costs. The Taliban immediately claimed responsibility for the attempted assassination of this child, this girl, and stated that if she survives, they will kill her later. They further maintain that they oppose Malala, and sought to carry out Islamic law/ Shariah (death), not because she wants to go to school, which they state is propaganda by the media, but because she promotes secularism and modern ideas. It is a twisted faith, in my eyes. How do these men sleep at night? How can they look at their own children and not feel enormous shame? My mind spins the news around and around. 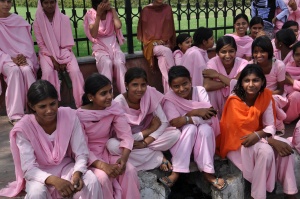 School girls in India, pose for my camera

Those questions, I know, are mute. These are people who hold to values that I do not and never will understand. It is not a matter of religion, or faith, despite what they claim. It is the position of extremist religion. Much of the Islamic world stands in support of Malala, as she fights for her life; they do not celebrate her fall. Malala’s father has promised to remain in Pakistan and continue to fight for the freedom of other girls to be educated, despite what has happened to his daughter, and the increased risk to himself. “We wouldn’t leave our country if my daughter survives or not. We have an ideology that advocates peace. The Taliban cannot stop all independent voices through the force of bullets.” (International Business Times) This catches my breath.  The girls at her school have stood up to say: “Every girl in Swat is Malala. We will educate ourselves. We will win. They can’t defeat us.”  (NYTimes) This brings tears to my eyes. All around Pakistan candlelight vigils are being held, and people are showing their solidarity with this brave girl. I stand with them.

While I blog in the comfort and safety of my home, putting out posts on everything from Malala Yousafzai to our chiweenie Gracie, Malala chose to use social media and blog as a means to share her experience with the world and educate others.  Each time she posted, she knew that she risked her life. Yet, she believes that the right of girls to be educated in the world is bigger than her own singular desires. It is chilling to me. Stirring beyond words. Her posts reflect the normal fears of a girl her age (11 at the time she started), as well as far more disturbing dreams and concerns about beheadings and violence in her small district of Swat. She paints a vivid, powerful picture of her cause and her life, in the posts she’s made. While we enjoy the freedom to prattle on about whatever we think will get us noticed:  for the sake of publication, readership, blog recognition, etc, Malala’s sole purpose for writing was to bring freedom to herself and others.

While I argue with my son to study for an exam that he has, Malala has a passion, a driveto study, and has lived under the constant threat of death, to herself, her father, and her family. Each day that she attends school, she faces that threat, but chooses to do so: literally, a gun to her head. Her father has long been an activist in his own right, running a school for girls is something that put a bull’s eye on him, long before his daughter took up the cause. He believes that girls have the the right to an education, just as boys do, in a country that is fighting to overcome the rule and influence of the Taliban, which adheres to strict and (I believe) twisted interpretation of the Holy Koran.

These girls want to study. That’s what Malala Yousafzai stands for.
image: heraldsun.com.au

It is impossible for my son to understand just how fortunate he is to live in a place where he is free to go to school. Where not only are the girls around him free to be there as well, they are equally likely to succeed. Taking a math test is a privilege he cannot appreciate; and I get that. I too take it for granted; most of us do. It is difficult to imagine that in other parts of the world, the most basic of freedoms are not a given. It is difficult to imagine a group of men pulling a bus over and shooting a young girl in the head, for wanting to go to school. But these things are happening and I believe we owe it Malala and all the girls like her, who struggle to be heard and treated fairly, to speak of this. To tell our own children that checking the math web site is a privilege, not just a task. While they may not get it, and they may not agree, perhaps they will stop a moment to think about those who can’t do it.

In the meantime, my sincere hopes are that this girl, Malala Yousafzai, does not become a martyr for “the cause.” That she does not need to die, for others to pay attention. I hope that she has a full recovery, and lives (safely) to study more, and become whatever she dreams of being. No doubt, her determination and convictions will serve her well as she struggles to recover. Please take a moment and leave a comment here. Share your thoughts.  Share this story with others; we should all take a minute to think about Malala Yousafzai.

If you are interested in reading more about Malala Yousafzai, check out the following links:  Diary of a Pakistani School Girl (BBC); Pakistani girl airlifted to hospital (NYTimes); Pakistani teen Bloggers shooting a ‘wake-up call’… (CNN); Malala in serious condition (Today’s newspaper); Malala Yousafzai (Wikipedia); We Can Do More To Fight Gender Inequality (; My Conversations with Malala Yousafzai (Christian Science Monitor); M.Y. Portrait of The Girl Blogger (BBC); **The Malalas You’ll Never Meet(Gail Lemmon, featured on CNN); read Half The Sky, Nicholas Kristoff and Sheryl Wu Dunn; check out and consider donating to Half The Sky foundation or any organization that focuses on education for girls and women.

Mother, Writer, treasure hunter, aging red head, and sushi lover. This is my view on life, "Straight up, with a twist––" because life is too short to be subtle! Featured blogger for Huffington Post, and followed on Twitter by LeBron James– for reasons beyond my comprehension.
View all posts by Dawn Quyle Landau →
This entry was posted in Activist, Awareness, Blog, Courage, Daily Observations, Education, Honest observations on many things, Life, Malala Yousafzai, Musings, Tales From the Motherland, Taliban, Women's issues and tagged Education for women, Equal rights, Malala Yousafzai, Nobel Peace Prize, Tales from the Motherland, Taliban. Bookmark the permalink.

16 Responses to Would You Take a Bullet… For Peace.