The U.N. Expands, and Fractures My Heart… Again. 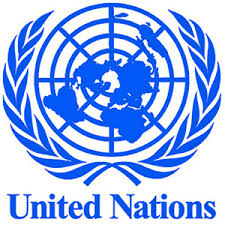 Note to new readers:  Our family took in two foreign exchange students from August 2011 until June 2012. Denmark is a 17 yr (now 18) old girl. China is a 16 yr (now 17) old boy. The U.S. is our 15 yr old (almost 17) son (AKA: Little Man). Israel, when home, is our 22 yr (23 now) old daughter (AKA: Principessa), and Canada our 19 (21 now) yr old son (AKA: Middle Man). I am The Secretary General. Smart Guy is Dad. Together, we are the U.N.: a home where laughs come daily, chaos reigns and borders fall easily, as we live like a real family.  Know that no foreigners were hurt in the making of this blog post or in the incidents cited. All parties were aware that their comments were being noted, and pictures were used with permission, and assistance in editing for privacy. That said… 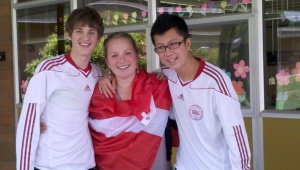 The UN just before it disbanded

It’s been a while since I’ve shared any news of the U.N., but there have been developments just the same.  My last posts were about the dismantling of the U.N. in May 2012 (For some funny, clever insight into the U.N. in its final stages, read here, here, and here), but we have all been in contact via email, Facebook and skype.  It has not been easy. I have missed Denmark and China so much.  Denmark is great at arranging Skype dates and sending me notes on FB or email— being in touch. China, has been a bit less available, in classic China style. Given Chinese regulations over Facebook, it’s not a big surprise. China’s tendency to swear at China the country, probably didn’t help his cause, in accessing the Faceboo, which, for the record, is not easily available in China. Given some of his posts, we wondered if he’d been taken out and publicly caned for some of his postings… but, he appears to be fine, and will be attending the University of Washington this fall!  “Ma, I wanted to move home” he wrote, when explaining why he chose UW over the other U.S. colleges that accepted him.

China, ever the enigma

While Denmark has been super responsive about staying in touch, China’s intermittent responses to emails and FB have been frustrating over time. He often takes weeks to respond to a message, and has not been available to Skype in the year since he left. For all I know, his kool hair cut and stylish ways have completely reverted to the slightly nerdish look he arrived with. Denmark spent virtually an entire year planning a visit to see us this summer, complete with her family. Endless emails and updates, to the Secretary General, who generally works best with “winging it,” “free falling,” and “last minute plans,” were daunting at times; but, then, when her arrival was pending, everything was set and arranged.  China, in typical style, sent an email about 6 weeks ago, announcing that he’d bought tickets to Bellingham, and would be arriving the very day that my father in law and partner are arriving, and the week that the U.N. expands and bursts at the seems. “I am bringing a friend. You will like him, he is very nice. We will be there for 4 days and I think we will have a lot of fun,” China informed me by email.  China-Secretary General communication remains tangled.

In addition to Denmark and China, the U.N. is expanding in ways that cause sleepless nights and moments of huge excited anticipation. Updates:  The U.S. has departed on his first solo journey, to Germany. He is visiting a good friend, who will be living with us from late August until the end of this school year, when both U.S. and Germany will graduate. So Germany will officially be joining the U.N. in late August, and the U.S. now has close German ties. Given that Israel has made it official and is remaining in Israel (currently awaiting immigration status), the Secretary General has had to work on better relations with the country, and make more efforts to travel to the region. Israel will be returning for two weeks to the U.N. Assembly in the near future, and will bring another Israeli.  Canada was in Beijing and exploring China from late January until late May, and has been doing an internship in Taiwan since then. In between, Canada travelled in Cambodia, Vietnam, Laos and Thailand. Consequently, Canada returns to the U.N. August 24th, with expanded relations throughout Asia. And Germany will arrive to remain in residence, in the final week of August.  Bringing the U.N. to six formal Nation Members, and extensive ties around the globe.

Denmark (2nd from L) and her family on Mt. Baker

The Secretary General, at the time of this post, is facing emotional upheaval, as Denmark prepares to Copenhagen. Having had her and her family here, off and on for several weeks (while they traveled all over the western U.S.), has renewed a deep connection and fondness for her wonderful smile, quick wit, humor and lovely voice. The days together were filled with deep warmth and love, and a newly forged and special connection to her parents and sister. Leaving her in Vancouver two days ago, for her flight back, was very difficult. Driving away was painful. Another goodbye, another adjustment to her absence. It is challenging on so many levels.

The job of Secretary General to an Assembly of countries so varied and dynamic is not easy. Brilliant minds, enormous passions, wide ranging personalities— individual nations with diverse and expansive motivations and approaches are not easy to wrangle and work with. As Secretary General, I am left to watch, often silently, as these countries make their impact on the world. In an age when there is often too much thought and too little heart, my heart is fractured and torn regularly. It should be stronger by now, but that is easier said than done.

To allow Israel to seek independent status requires enormous flexibility and the ability to put aside personal desires. Oh to have that small country stay nearby would be so sweet, but she is now rooted in the Middle East and has wide spanning visions and endless passion to share there. Israel is working on helping refugees in Syria, and the world needs more hearts like hers. (Read her work here, in the Jerusalem Post and Reuters). To see Denmark and China join the Assembly for one magical year and then see them go, and come and go again, is wonderful and challenging all at the same time. Germany is bound to bring new changes, challenges and joys to the Assembly as well. We may be eating a lot more schnitzel come fall. My boy, Canada, is doing such big things, that my brain hurts trying to keep up. That moment when you realize that your little countries have become bigger and smarter than you, makes a Secretary General’s head spin. 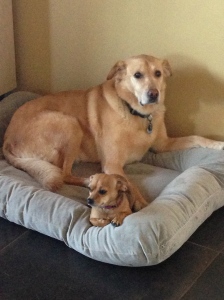 The Assembly will be in full session for one glorious week in August. Afterwards, it will be great to have China the region again, able to join us on some weekends and interact more regularly with the US and Germany, as well as Israel and Canada when they’re here. The nations are are all on good terms and expanding their horizons. Even Labrador and Mexico/Germany (Chiweenie) have found neutral ground, having surrendered the fight for the gray thing, they both covet.  The world is a smaller place, with the help of Skype, Facebook, email, and now University. Nations have developed and grown in ways that make a Secretary General proud and happy… but the process is a tricky road. We are brought together, and we say goodbye; over and over again. And this heart fractures… then heals.

Mother, Writer, treasure hunter, aging red head, and sushi lover. This is my view on life, "Straight up, with a twist––" because life is too short to be subtle! Featured blogger for Huffington Post, and followed on Twitter by LeBron James– for reasons beyond my comprehension.
View all posts by Dawn Quyle Landau →
This entry was posted in Aging, Awareness, Blogging, Can't sleep, Daily Observations, Foreign exchange students, Honest observations on many things, Humor, Israel, Life, Musings, My world, Parenting, Summer, Tales From the Motherland, The U.N., Wonderful Things, Writing and tagged #WPLongform, Adult kids, aging, Humor, Life transitions, Longform, Musings, parenting, Tales from the Motherland, The U.N.. Bookmark the permalink.

18 Responses to The U.N. Expands, and Fractures My Heart… Again.