I Want My MTV…

MTV debuted the year I graduated from high school, and just weeks before I started college. It was a revelation, in the life of this music junky. My peers and I had been blessed with the brilliance of Saturday Night Live, which colored our high school years with crazy antics of John Belushi, Larainne Newman, Chevy Chase, Dan Akroyd, Gilda Radner, Garrett Morris and Jane Curtin. We were forever quoting Samurai, Wild and Crazy Guys (with the help of Steve Martin), Coneheads, etc. The brilliant comedy and memorable skits were weekend fodder and were replayed for our days in class. 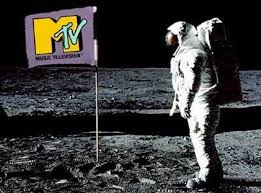 Personally, I think I grew up in an amazing time. So many break-through venues started as I was figuring things out in my own life, and heading out into the bigger world. If SNL gave wing to my dry, sarcastic sense of humor, MTV fed my music-driven soul. It heralded an age when music took visual form and there was a video, a movie of sorts, to make the music that much more intense. I was riveted that first day, and the debut still stands out as epic in my young life. My friends and I stayed up late, having been partying at a friend’s, and watched the amazing first footage as the iconic space walk was revamped to include an MTV flag. That image would be the hallmark of MTV for ages, and how I will always remember the show. Honestly, I would have to look up what the first songs were; I was transfixed and the the concept was far sharper than the actual music. (First video ever played on MTV… probably true, Video Killed the Radio)

There’s no denying it, if one looks back at those old videos, or tries to compare them to today’s slick, technologically savvy productions, they are laughable. Often, when I pull up an old video, that I thought was brilliant then, I’m left stumped, disappointed. But at the time, oh how glorious it all was! There was music, and videos (videos!) 24/7 with no commercials. The mere idea of music non-stop was incredible! The idea of videos was absolutely huge. Today it’s a given, but in 1981 music videos were an electric jolt, a realization of how we imagined our favorite artists to be. Seeing them swagger or chase the girl in the song, or just sing to the camera, was huge. Now, some of those videos make me laugh, too. The wild hair, the outfits, the drama laden singing and primping before the camera seems hokey. In 1981 it was edgy, sexy, and super kool. (When I wasn’t dancing to this, I was watching it:)

That fall, at college, MTV was a newborn and I was a freshman. I attended a (then) small all girls college in Cambridge, MA and I felt like the world was my oyster. My home town, barely an hour away, felt like it was on the other side of the world. Boston was my playground and I had 200 other colleges and universities from which to find friends. But at night, you could often find the other girls from the small house I lived in, and I, up watching MTV. We were getting to know the VJays, who packaged our music and became early celebrities in an arena that would one day be huge. Martha Quinn rocked our world: super cool, but nice, and out there doing what we all wanted to do: Work for MTV. We were mesmerized as videos got better and better and the videos themselves became an integral part of new hits. (Check out these earlyVJays:)

As I finished college, MTV was well into it’s own groove: the videos were sharp and edgy. No longer low budget home-shot videos of lip sinc’ing, music videos were huge productions. It was a big fat let down when commercials were added, as the idea of “commercial free music” had been a main hook at the start. For a while, it was ok, given that the videos just got better and better, and there were still relatively few ads. The VJays worked to make it all interesting;  it seemed a small price to pay to still see new music on a steady basis. For many years, when I was home, if my TV was on, it was tuned to MTV. (Regardless of whether you liked her, Madonna rocked MTV, with some of her first videos:)

Of course, becoming a parent was the beginning of the end of my MTV days. My kids’ early years included music videos and lots of the music I liked, but it was inevitable that Sesame Street, Disney, Barney, and the likes would change our viewing. MTV was changing too, and not in ways that interested me. I didn’t have time for Real World and it’s cast of loopy characters. I was busy breast feeding, and going to mommy and me classes. I was wrangling toddlers in Chicago and toting my groceries in my faithful stroller. What did I care what some 20-somethings were doing, or not doing, somewhere else? My life was less video and more Baby Beluga and Little Mermaid.  When I watched it was only for the music. When it was mommy’s turn for TV, I listened and watched MTV, often as I tried to make exciting dinners and occasionally block out “mommy, mommy, mommy.” (Though not a teen, I was an early Nirvana fan:)

Today, I could barely tell you what MTV is all about. Trashy New Jersey brats have replaced the scene I loved. Videos that make me blush (and that’s not easy) or that just don’t hold my attention are what I find on the rare occasion that I tune in. Admittedly, I can barely recall tuning in in recent years. For me, MTV lost is sparkle a very long time ago. But then, isn’t that the age old way of the world? We age and watch the new guard stake it’s place, and wistfully say how it’s all gone to the dogs… And it’s hard not to fall into that trap, I’m seeing more and more. Somehow, it seems like those years when MTV and I were younger, were simpler, sweeter times. Perhaps not as slick, or as fabulously packaged, but there was magic in the simplicity. It was all about the music, and not about the image. We tuned in to finally see what our favorite artists looked like, not to see where they lived, who was making it in a “real” world, or eventually, who was boinking who in Jersey. We walked around saying “I want my MTV,” and it was about the music. (Then and now. Similar song, but I would argue that the current one/Flo Rider with Kesha, rides the tails of the original/Dear or Alive… glossier and slicker, but not as fun:)

What do you remember about MTV?  Were you around at the start, or did you join the party later? Name some favorites. Share your thoughts in the comment section.

This post is part of a blog hop, sponsored by Emily at the Waiting and Ashley at Zebra Garden. I missed the deadline this week, but wifi is not always a given. The general theme of the hop is “Remember the Time,” and they add an new bit each week. Check out other posts on either site.

Mother, Writer, treasure hunter, aging red head, and sushi lover. This is my view on life, "Straight up, with a twist––" because life is too short to be subtle! Featured blogger for Huffington Post, and followed on Twitter by LeBron James– for reasons beyond my comprehension.
View all posts by Dawn Quyle Landau →
This entry was posted in Aging, Awareness, Blog, Blogging, Daily Observations, Honest observations on many things and tagged 80s music, Blog hop, Coming of age, MTV, music, SNL, Tales from the Motherland, Videos, VJays. Bookmark the permalink.

21 Responses to I Want My MTV…