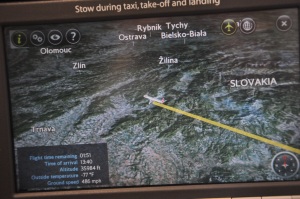 Israel is a hard place. As I fly over Turkey, Bucharest, Czech Republic, Germany, etc, (each hour a reminder that just getting there is hard– that my girl lives very far away) that is what runs through my head, over and over: Israel is a hard place. It’s something that hit me the first night I arrived there nearly two weeks ago, to visit my daughter, and a statement that played out many times with people I spoke with in Israelis– lifelong citizens, as well as those who are new there, Arab and Jew alike: Israel is a hard place… to live, to understand, to leave, to support, to deny. 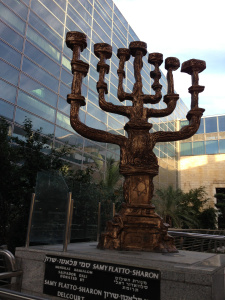 Welcome to Israel! At the Ben Gurion Airport, Tel Aviv

To be clear: I didn’t “interview” people about this. This is something I noticed, living in Jerusalem for twelve days and traveling back and forth to Tel Aviv– different from my one other trip, two years ago, when I was very much a tourist (read here, here, and here). Then, I was free-falling with my girl. We explored places around the country, taking in the beauty, the history and the people– me a traveler and tourist, as my daughter showed me the country she loves and has embraced as a citizen. I spent two weeks, and I left besotted, bewitched– knowing I would return. This time I went to help my girl move from Jerusalem to Tel Aviv, where she will join her fiancé. We were not playing around this time, and the experience was very different.

To be honest, I hesitate to even write about Israel or Jerusalem; the response to this topic can be very heated– as I learned in a Huffington Post piece. This is not about politics, or taking a position about the many complexities that Israel encompasses. The politics of the area is a topic that is too big and potentially volatile. I am not an expert, and my feelings on the topic are as complicated as the many and varied details that can be thrown from both sides. This is about one mother, an American, who visited her daughter (who is an Israel is citizen) there and got to see what others have been telling me for a long time: living there is hard.

Sometimes, you take a short cut… which is also a hill to climb

I met friendly Israelis and unfriendly Israelis. I met and spoke with Israeli Jews and Israeli Arabs in Jerusalem. My guess is that neither trusted me entirely and gave me only an inkling of what they really feel. But over and over the word “hard” was tossed into the mix. Getting around is hard work. I logged an average of 13,000 steps on my FitBit (a geeky pedometer that folks at home rely on like a watch… or oxygen) daily. I logged almost 26,000 one day (that’s nearly 13 miles of walking) and my least active day was 9,000+ steps. In Jerusalem, everything is up one hill and down another. Repeat. The hills are not small. As I got on the plane to go home, I realized that my calves and legs are sore; they’re also stronger than they were when I arrived.

(I didn’t lose any weight, because the food along the way is just too great to pass by. )

Getting around is harder because so many people don’t have cars. More Israelis have cars now than they ever have, I was told. However, with Israel’s average price for gas at $8.28 per gallon ($2.12/liter), it constitutes 8% of the average Israeli’s daily income to buy a gallon of fuel. (Jerusalem Post*) Israelis don’t drive as freely as Americans do. It’s very expensive; traffic is very challenging– in Jerusalem, all of those hills come with windy streets that are one way this way and blocked that way, and there’s a charge to park most places. Drivers are aggressive and fearless; driving there is not for the weak of heart. Fortunately, I learned to drive in the Boston area; I was not daunted when we rented a car to move my daughter’s things to Tel Aviv. Each time we drove from Jerusalem to Tel Aviv with another load, my daughter shook her head and said again, “Wow! This bus ride takes me at least 2 hours (each way) every time I make it.” We did it door-to-door (to the furthest Northern section of Tel Aviv, much further than the bus takes her) in under an hour, twice, and in no more than an hour other times– with frequent traffic, and waiting a very long time to get gas. Getting gas was hard too. Fortunately, we had a very fuel-efficient rental, and used barely ½ a tank for all of those trips. So while more people are driving, driving doesn’t always translate to easier. 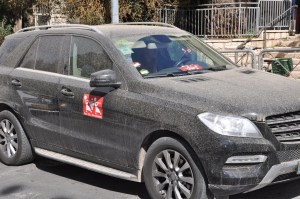 And then sand storms come in off the desert… and everything is harder, and dirtier!

I walked a lot while I was there. I enjoyed walking around Jerusalem; it’s an infinitely fascinating city, and walking is a great way to really see it– but walking is not easy either. Those aggressive drivers do not always stop for pedestrians, unless there is a very clear light forcing them. Inevitably, a driver stops for you, but it’s not a given; the pedestrian does not have the right of way, as so many people at home take for granted. It’s not uncommon for a driver to honk at you as you cross– a straight-forward nudge, admonishing pedestrians to not keep them waiting any longer than needed… as if I wasn’t already hurrying, lest another driver speed around the stopped driver. That happens a lot too. For three days, a sand storm came in off the desert and everything was covered in a thick, brown dirt coating. The air was brown; cars were covered in brown, and breathing was hard. As an asthmatic, it made all of that walking that much more challenging. The residents of Jerusalem simply plod on. If they’re struggling with air quality, I found few people openly complaining. Most acknowledged that it was unpleasant, but just something (else) they needed to work around.

Once you arrive someplace in Jerusalem, you need to be prepared to go through security many places– generally an armed guard and a metal detector (think city court in most US cities), at nearly any mall, historic landmark or crowded place. Going grocery shopping? Security. Entering the mall? Security. Entering the Old City (Western/Wailing Wall, Dome of the Rock, Church of the Holy Sepulcher), lots and lots of security. If you aren’t prepared to open your bag and wait, to overlook the large gun… well, then it’s just hard… er. 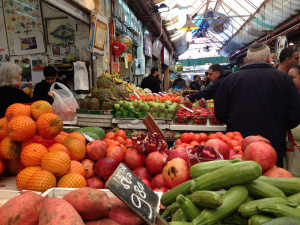 Buying most things costs much more. We saw coffee, not great coffee mind you, for about $40 p/lb; we buy it for about $10 p/lb average, for good coffee at home. Fresh produce, is ironically, much less overall; good street food is inexpensive, but restaurants are not. I must have heard my daughter say “I don’t buy that, it’s too expensive,” or “that… is two hours’ wages,” many times each day. It was a sobering reminder of just how much I do in fact take for granted at home. Shopping for her new apartment was, yes, hard. Hard choices again and again: vacuums are a luxury; microwaves are a more important luxury; choices must be made.

So many structures in Jerusalem are built out of the classic “Jerusalem stone,” and insulation is not good in most homes. Heat is something you turn on for brief periods; it too is expensive. It was really cold, inside, nearly everywhere we went. Hot water is not available on demand in many homes. If I wanted a hot shower, I had to wait an hour for the water to heat up or set a timer for specific time later, and then I’d better not dally. Forgot to set the timer? No shower. Showing my daughter photos from a day in the city, she warned: “Your hot water is getting cold. If you want that shower…”

Eating, getting around, shopping, hygiene, driving, walking; it’s all hard in Jerusalem; it’s hard in much of Israel. It’s hard, in part, because it’s so different at home; we have it so much easier and so many of us don’t actually get that.

The people of Israel reflect the reality of these hardships. They are direct and to the point, a less prone to chitchat and pleasantries. What do you want? Get to the point?– they say with their eyes. Those eyes flash irritation with delays, inconveniences, or indecision– Or their abject acceptance that this too will be hard. Upon arriving at my Tel Aviv hotel, a cab driver yelled at me for three minutes, at 1AM, because I had no cash… as I’d said when I got to the cab stand at the airport… where I was told “A credit card is no problem.” It was– a problem. But these looks, the yelling, is not personal; a moment later, Israelis are wishing you boker tov, yom tov, erev tov, Shalom!– good morning, good day, good evening, Peace: hello/goodbye. This idea that it’s not personal was explained to me… over and over, as if I was hard of hearing.

This is all balanced by the beauty of this ancient land, these ancient places. The blossoming olive and almond trees; the food that is so good you are constantly thinking about your next great meal; the history; the blend of immigrants from all over the world, along with Orthodox and Secular; the colors, smells and sounds of the Arab and Jewish markets– existing side by side, despite conflict elsewhere– all of these elements lure you into Jerusalem, into Israel’s magic. The challenges are many; the complexities of living in Jerusalem in particular, and Israel as a whole, are endless. Have your bag open at security; don’t ask where things are; don’t stand staring at the fantastic menus too long; place your order and move along. Don’t take things personally, but be prepared to stand your ground. Don’t make things harder and Israel will do what it does best: get under your skin, cast its spell, and call you back… despite the hardships.

There are so many things that make the hardships worth the effort:

The art in the Shuq/market…

The eclectic bustle of the city…

The locals in the park..

The olive groves blooming in spring…

Help Me Reach My Goals! I’d love to see the Tales From the Motherland Facebook page reach 700 likes in 2015. Have you stopped by to spread some fairy dust? Follow me on Twitter, where I’m forced to be brief. Most importantly, if you like a post I’ve written, hit Like and leave a comment. I love to hear what readers think. Honest, positive or constructive feedback is always welcome. Click Follow; you’ll get each new post delivered by email, with no spam.  If you see ads on this page, please let me know. They shouldn’t be there.  ©2014  Please note, that all content and images on this site are copyrighted to Dawn Quyle Landau and Tales From the Motherland, unless specifically noted otherwise. If you want to share my work, please give proper credit. Plagiarism sucks.

Mother, Writer, treasure hunter, aging red head, and sushi lover. This is my view on life, "Straight up, with a twist––" because life is too short to be subtle! Featured blogger for Huffington Post, and followed on Twitter by LeBron James– for reasons beyond my comprehension.
View all posts by Dawn Quyle Landau →
This entry was posted in Beautiful places, Blog, Daily Observations, Israel, Life, Musings, My world, Tales From the Motherland, travel and tagged Dawn Quyle Landau, Getting around Jerusalem, Israel, Jerusalem, Tales from the Motherland, travel. Bookmark the permalink.