Rumors of my demise are probably pretty accurate. I had a blog. I had readers. I loved it. and lately I barely exist in that world. I have been writing, writing, and writing more for my novel. I’m editing like crazy and re-writing. I’m deep in there. And I’m reading, a lot. I’m sharing some of my book reviews, pretending I’m blogging. Bear with me. Have my back. I miss you. 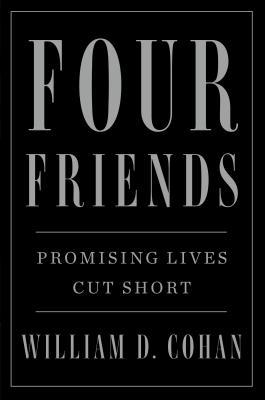 ** I am vague in areas to avoid spoilers.

I heard about this book when Willian Cohan was interviewed for something on CNN. They gave a little plug for the book, and I was intrigued. Having grown up in Massachusetts, and as a college prep tutor, I know a lot about Andover, and the story sounded compelling. However, I found this book very disappointing. In fact, I returned it once about half way through, but decided I should finish it to write a fair review. I bought it again and wish I hadn’t.

I was turned off by page 24 in this book, when Cohan writes about the death of a childhood classmate, Brad Morrison. Referring to Morrison’s death, Cohan summarizes with: “his life snuffed out in an instant, a victim of appallingly bad judgment.” I was barely in to this book and found this comment so incredibly harsh and insensitive. Brad Morrison was 14 years old! I wondered how his family would feel reading this, and commented on that in my notes. I subsequently found this comment by Brad’s sister very powerful to read: https://www.goodreads.com/user/show/1…The rest of my review hits on this point repeatedly: there is a shocking lack of empathy or human concern by William Cohan for the subjects in this book, or their friends and families. As a journalist, he does not need to sugar-coat or report only the good, but is there a need to denigrate these people? It put me off to a negative start, and nothing changed my mind throughout this book.

As other reviews have noted, the author beats the reader over the head with Andover. Yes, it’s a very prestigious school. Many readers may not have heard of it before, but sixty pages in, when Cohan finally introduces the first “friend,” I was getting really sick of hearing about how special it is, and how only the elite of the elite get in, unless they are special, or token minorities. The Andover bits are peppered with misogynistic comments; catty observations, and holier-than-thou storytelling. It came off as vapid and repetitive. Interestingly, the first chapter (about Andover) is titled: “Not for Oneself,” when everything Cohan reports about these four men (except Jack Berman), seems to focus for the most part, on very egocentric lives.

The story of Jack Berman, the first of the four friends, is the one story that truly held my attention and speaks to true tragedy. The child of Holocaust survivors, Berman’s story is powerful and inspiring. Berman was not raised in a privileged, pretentious home; he worked hard, was highly intelligent, and his parents built a life from nothing. His older brother recognized Jack’s incredible intelligence, when Jack was quite young, and sought a better education and life for his little brother. Berman did not arrive at Andover with a legacy, or wealth; he got in on his strength of character and academic accomplishments. All of these stories end in tragedy, but Jack Berman’s is the only one that does not stem from his own failings (as suggested by Cohan). This story is truly heart-breaking–– about a man who was good and righteous. He did not ride on coat tails, he forged his own path to success and his life ended in the most horrible of ways.

Unfortunately, all three of the other stories focus on hubris, entitlement, legacies that are hard to live up to, and boys (then men) behaving badly. None of the subjects seem to be actual “Friends” of the author, and at times, the reporting reads as jealous nit-picking and salacious gossip–– for instance, it was not unusual for young people to be smoking weed, or doing cocaine in the mid-seventies and early eighties, but Cohan reports these activities as if those involved are criminals, with intense focus on these foibles, and little attention to their strengths or accomplishments. Granted, there is some very irresponsible behavior (serious car accidents, over-use of drugs, etc), but there is too much focus on this aspect of their personalities, and not enough on the good.

These four men all graduated from one of the most prestigious, rigorous college prep schools in the world (again, be prepared to hear that over and over), and yet Cohan makes it sound like all but Berman got through without any effort. I don’t buy that. They failed exams and partied, but we don’t get to see the hard work and focus that must have been part of their success and graduations from Andover. I found it very tedious and repetitive. There’s little depth in the reporting, but a litany of bad behaviors, about four boys who become successful men, then die tragically.

And that is another key thing that bothered me in this book: all of these deaths are indeed tragic. These men died young, and all of them in unnatural, shocking ways. Yet, aside from Berman, Cohan tells each story in a way that seems to indict each man in his own death. While I see that there were decisions made that led to these tragedies, I found this storytelling akin to the trolls who weigh in on tragedies in online news stories––arm-chair analysis, based on hearsay and presumptions. After Berman’s story, this repetitive (Engquirer’esque) style of reporting turned me off this book. Having bought the book a second time, I finished it.

The author frequently quotes friends, family, and acquaintances of the subjects, but intersperses very bold statements between quotes, as if they are continuations of the quotes; when in fact they appear to be Cohan’s assumptions. For instance, about John Kennedy and Carolyn Bessette (who is dragged through the mud in this book–– zero compassion or balance in reporting!); Cohan is quoting Sasha Chermayeff (a close friend of John) about his marriage: “He took these incredibly super sexy pictures of John and Carolyn where they were like on fire. She even said to me,’We were like on fire during that session,’ and you can tell”… (same paragraph, but outside quotes:) But she was fickle, Chermayeff continued. Caroyln was married to John but had fallen back in love with Bergin. “She wanted it all…” This kind of “reporting” or storytelling is very misleading, I believe. Cohan slips these observations in, stating that Chermayeff stated this, but it’s not in quotes. This happens often in all of the stories, but particularly in the JFKjr story. In addition, there are countless editorial mistakes that really jumped out at me (as an editor)–– dates and details that change, with no explanation. I read this on Kindle, so maybe there were glitches (?), but I highlighted many of them.

Finally, the book gives about 60 pages to the first three men, but about 135 to John Kennedy. This came off as particularly exploitive and sensational. As others have noted, there is nothing new here, but I felt that Cohan put an exceptionally negative spin on almost all aspects of John’s life. He is painted as an entitled, (excessive) drug using, angry, promiscuous, risk-taking, careless, (insert endless other negative assertions) boy and then man. There is little compassion for the young man who grew up in a spotlight not of his choosing. That he did many things that young people his age did. He wanted a happy life, and lived life fully… and died in an accident that can’t be fully explained, because all 3 passengers died tragically, that day. To insinuate that it was due to Carolyn’s pedicure (I’ve run late for silly reasons), or John’s hubris, is underestimating the power of fate. We make a series of decisions every day, that sometimes end in horrible ways… when on another day, these same things might go very differently.

I found this section particularly salacious and insensitive. I wasn’t looking to learn anything new about JFK Jr; I doubt there is much more to learn. The man’s life was lived under a microscope, and after his death everyone with a story came out to talk. These stories were reported endlessly, as they are on the anniversary of his death each year. It’s sad. Cohan didn’t need to focus double the space on one “friend,” when all four men lived lives that were full and ended equally tragically.

I tried to read each story as written, but found the overall arc of each one focused too much on negative details, and hurtful interpretations. There is too little good here. There is too little about the other things that made each of these people human, and fully fleshed out. It’s sad that William Cohan, a “friend” of these men has written a book that takes away from their lives, rather than telling a more balanced story, that brings compassionate light to their lives and deaths. I was very disappointed, and can only imagine that the families of these men, are too.

Final note: this is an easy read, and each story is told separately. If you’re on the fence, it doesn’t take a big chunk of time to read this book.

©2011-2019  All content and images on this site are copyrighted to Dawn Quyle Landau and Tales From the Motherland, unless specifically noted otherwise. If you want to share my work, I’m grateful, but please give proper credit and Link back to my work; plagiarism sucks!

Mother, Writer, treasure hunter, aging red head, and sushi lover. This is my view on life, "Straight up, with a twist––" because life is too short to be subtle! Featured blogger for Huffington Post, and followed on Twitter by LeBron James– for reasons beyond my comprehension.
View all posts by Dawn Quyle Landau →
This entry was posted in Authors, Book reviews, Honest observations on many things, My world, Tales From the Motherland, Writing and tagged Book Review, Dawn Quyle Landau, Four Friends, JFK jr, William Cohan. Bookmark the permalink.