And A Gratitude Miracle Happened! 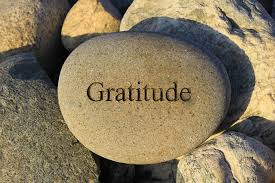 It’s been two weeks since I posted 50 Happy Things, Bloggers Unite In A Flood of Gratitude, and the outcome has been nothing short of a miracle! Actually, some bloggers claim that posting their contributions brought miracles… I’ll get to that, later. First, I need to right a wrong. When I posted this project, I was misinformed about the history. Let me be clear: I thought I had it right; I believed what I put out there, but I did a injustice to a blogger I admire so much! In my intro, I stated that Jen at Jenny’s Lark, and I did this last year. True. I stated that I was inspired by a post Jen wrote in December 2014, of 50 Happy Things (true), and that it had originally been a Daily Prompt. False! That’s what I thought, but I was wrong. Turns out that the Daily Post that inspired Jen was simply a prompt that suggested bloggers write for 10 minutes on any subject. Jen came up with the idea of focusing on 50 Happy Things and combined it with the 10 minute time limit, for a wonderful blog post… that inspired me.

I followed suit (read: copied Jen)–– though I focused on “gratitude,” while Jen focused on “happy” (I addressed this in this year’s post) and then I encouraged others to write one too. As they did, I added their links to my own blog post and Jen followed suit. I think there were about 6 of us. That was December 2014. It was so fun, inspiring, and felt like such a great way to end the year, that I suggested that we do it again this year. But it wasn’t the easiest year for either of us, and as with so many best-laid plans, it fell by the wayside… until December approached and I realized I needed a dose of gratitude.

Once again, Jen contributed some brilliant feedback. First and foremost, she thought of the title. I was bouncing several ideas off her, and she came up with the title I used. I was focused on Gratitude; she suggested happy, with the outcome being gratitude. She and others were great sounding boards, as I worked out how to expand this to something more inclusive and expansive, and I was and am so grateful for her clever and supportive feedback. Next, I sent out an informal invite/ suggestion to several bloggers, I set a date, and decided to add InLinkz, so that all of us could actually link up. In the end, the post idea was Jen’s the including others was mine; we make a great team! But you all have Jen to thank… or, dare I say, you can be grateful to Jen, and happy that she thought of this wonderful exercise?

The expanding part was a bit daunting. I’ll be honest, I expected about 4-8 (max) bloggers to join in. I was going to write my post regardless, but it occurred to me several times in the hours before this went live, that it would be very embarrassing to have a title that said “A Flood of Gratitude,” if only a few of us were doing the flooding. Some folks never responded to my invite; others were busy with the holidays and unsure about committing; some said yes, but didn’t have the time, and a small few agreed to write and post on December 21st. Four days before Christmas was probably not ideal planning! I scheduled it to post at 5am EST/2am Pacific, where I live. I was so worried that the InLinkz wouldn’t work, that I stayed up until 5:30am that day! What happened next has surpassed my wildest imagination!

To date, 64 other bloggers have joined what I coined on Twitter as #BloggersUniteInGratitude. On the second day, as the good vibes spread, that hashtag was actually trending on Twitter! While I don’t fully understand Twitter, I know that’s good! And other wonderful miracles followed. Just hours after she posted, the new blood mobile that wasn’t expected for another two weeks, arrived early in the town where Jen lives. Several bloggers posted wonderful little surprises that happened to them just after posting–– unexpected things working out, a prize for one blogger, happy tidings. The biggest miracle? Despite lots of personal challenges and plenty of folks with situations that had them struggling, every single blogger noted that they felt much better after writing their list. Every single blogger felt both happy and grateful, for the things that they thought of in those ten minutes (though a few went over the ten minutes, and another few went way over the ten minutes).

That’s inspiring! What I found particularly impactful was that with each list I read, I felt better and better. Each list reminded me of other things that make me happy; each list helped me realize other sources of gratitude in my life. Without exception, everyone acknowledged that their family was high on their lists of gratitude and happiness. That’s inspiring. Most mentioned friends. Music was big, as was blogging itself and the readers who read those blogs. We bloggers definitely appreciate those of you who read our words! Quite a few people mentioned their pets. There was food, beautiful or special places, fitness, and love. I was impressed by how many people noted that they were grateful to have good doctors. Pillows, a favorite pair of shoes, rain, sunshine, quiet, dancing… these and so much more made it on to happy, grateful lists.

Next year I’ll do this again. It has been inspiring and rewarding! It has also been time consuming. I’ve read every single post; I’ve tweeted anyone whose Twitter name I have, and I’ve helped a lot of folks get their link to work. All of that to say: I won’t do it the week of Christmas again! I think this is the perfect exercise to welcome a New Year and let an old one end. I will get the history right next year––credit where credit is due, and gratitude to a blogger friend who had a great idea and shared it. Like I said, Jen’s a smart lady; she suggested I keep a list of things that inspire me, through the year. It gives you a good place to start, when you start that timer.

And a final word about the timer: the timer is part of what makes this exercise special. I have done 3 Daily Prompts that were timed, and in each case the time limit lead to a flow of thought that was freeing and impactful. When it comes to this list, the idea is to not over think it. What inspires you? What brings you joy, makes you happy? What are you grateful for in life? Just write it down. As I noted, you can take a few extra minutes to add photos and links, but for me, it was the lists that didn’t have a lot of explanation that really made me think. Those were the lists that felt most inspiring, for me. It’s not about the story telling, it’s about being in the moment, and feeling happy and grateful.

If you feel inspired and would still like to join this blog party, details are in this post, and the link is available until January 15, 2016.  If you’d like to check out all the fabulous blog posts, you can find them here.

Help Me Reach My Goals!   KAPOW!  The Tales From the Motherland Facebook page recently hit the 2015 goal of 800 likes (which I set after hitting the 700 mark)! I’m going big for the next year and aiming for 1,000!! Have you stopped by to spread some fairy dust? Follow me on Twitter, LeBron James does (yes, for real)! Most importantly, if you like a post I’ve written, hit Like and leave a comment. Honest, constructive feedback is always appreciated.

Click Follow; you’ll get each new post delivered by email,  no spam.  ©2011-2016  All content and images on this site are copyrighted to Dawn Quyle Landau and Tales From the Motherland, unless specifically noted otherwise. If you want to share my work, I’m grateful, but please give proper credit and Link back to my work; plagiarism sucks!

Mother, Writer, treasure hunter, aging red head, and sushi lover. This is my view on life, "Straight up, with a twist––" because life is too short to be subtle! Featured blogger for Huffington Post, and followed on Twitter by LeBron James– for reasons beyond my comprehension.
View all posts by Dawn Quyle Landau →
Aside | This entry was posted in Honest observations on many things and tagged bloggers, BloggersUniteInGratitude, blogging, Tales from the Motherland. Bookmark the permalink.

29 Responses to And A Gratitude Miracle Happened!